‘Tavella brisa’ bean includes growth Types I and II (Singh, 1982), has white flowers and the immature pods are characterized by a purple colour (Fig. 1a) that changes into white parchment during ripening. In Catalan language, the variety’s name means pod with the colour of crushed grape skin. It was formerly grown together with maize and suffers from lodging when cultivated alone, thus making mechanized harvesting difficult when it is cultivated without support. Seeds are white, rounded and small (25 g/100 seeds), belonging to the Navy market class (Fig. 1b) (Santalla et al., 2001). The most distinctive characteristic is the colour of the immature pod, that gives the name to the landrace.  From 1970 to 2010, the ‘Tavella Brisa’ germplasm suffered numerous introgressions (Sanchez et al., 2007) that modified the populations and affected its sensory value. This landrace is adapted to the climate (Mediterranean with Atlantic components) and soil (volcanic soil with high levels of potassium, very good water retention, and high cationic exchange capacity) of the Volcanic Region of Santa Pau in Garrotxa County, in northeast Spain. In those conditions it yields very high contents of protein (over 25%) and is largely appreciated for its low perception of the seed-coat, and its delicate taste.

The sensory properties of Tavella Brisa are clearly linked to the particular environment where it is historically grown. In fact, is a splendid example of the interaction genotype x environment effect (Romero del Castillo et al., 2008). When it is cultivated out of its terroir the protein content decreases dramatically, the texture becomes mealy and the seed-coat is very perceptible.

The origin of the landrace is Mesoamerican and is related to the Navy market class (Santalla et al., 2001), with which is easily confused at a seed level (Sanchez et al., 2007). Tavella Brisa landrace is one of the varieties accepted into the PDO Fesols de Santa Pau and is the most recognisable one for its purple pod during ripening.

Tavella Brisa has a very good marked, and it is renown in the area of cultivation but also in other counties. The difficulty of the morphological differentiation of the seed has favoured all kind of fakes during many years. In fact, as the production of the area is quite low, we calculated that only 10% of the product present in the Barcelona market was Tavella Brisa at the end of the last century. Even Canadian or EEUU varieties were imported and packaged under the name of Tavella Brisa (Fesol de Santa Pau). Luckily, the achievement of a PDO cut this anomalous situation, and now the production of Tavella Brisa, cultivated in the historical location has doubled the production. 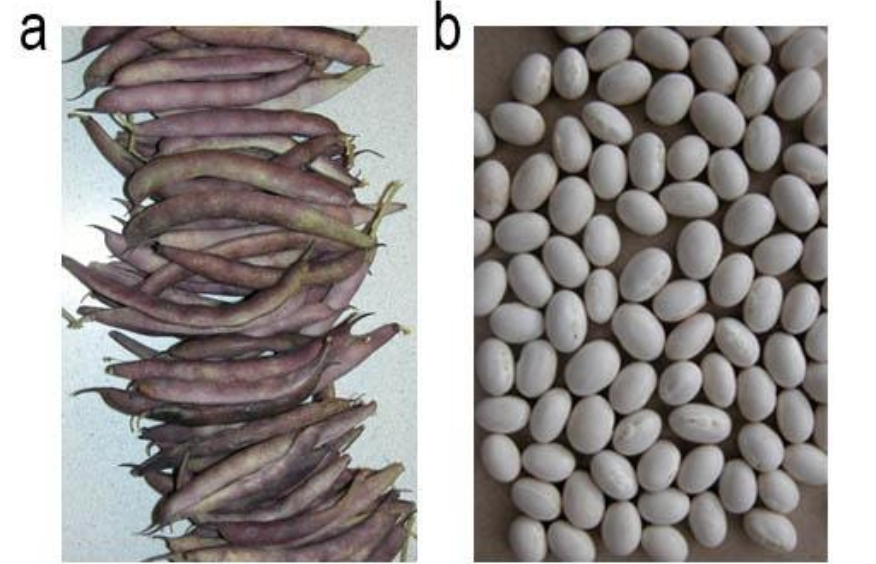 Picture 1: ‘Tavella Brisa’ immature pods (a) and seeds (b). Note the colour of the immature pods that gives the name to the landrace.

The Tavella Brisa landrace is mainly cultivated in the part of the Garrotxa county included into the Natural Park ‘Zona volcànica de la Garrotxa’, always in soils of volcanic origin. The centre of this area is the municipality of Santa Pau. As mentioned above, its cultivation out of this area yields low quality beans. The area of cultivation coincides with the area labelled since 2015 as PDO Fesols de Santa Pau, ensuring a determinate composition of the soil (with a very high K content and cationic exchange capacity), together with a minimum depth of the soil (Tavella Brisa is cultivated without irrigation and needs a reservoir of water in the soil to last its cycle because the irregular distribution of rain) (Romero del Castillo et al., 2008).


Until 1950 the Tavella Brisa bean was cultivated together with maize. This was a very typical combination in many places of Spain. The introduction of high yielding hybrids of maize separated the crops and Tavella Brisa became residual. When cultivated alone Tavella Brisa tends to lodge, forming a compact mass of vegetation that enhances the development of fungal diseases. As variability occur into the landrace, farmers have made selection against indeterminate growth, and the Fundació Miquel Agustí (FMA) has developed new varieties that keep the main traits of the landrace but with determinate growth (Almirall et al., 2010). The productivity of the landrace is highly dependent of the rainfall but is high compared with foreign Navy type varieties that have been proved in the area, especially in dry years.

Nearly all producers commercialize Tavella Brisa under the label PDO Fesols de Santa Pau, the best way to guarantee the high sensory value of the landrace cultivated in the volcanic soils of Santa Pau municipality, in a surface of about 30ha. So, at present, the fake around the landrace has significantly decreased. The productivity ranges from 400 to 700 kg/ha.


Most of the producers use at present the improved inbreds obtained de FMA, fully inside the landrace variety type. The upright growth and the tolerance to drought of some of the new lines make them more useful than the old mixed populations of the landrace. The multiplication of this inbreds is guaranteed through the obtainment of G0 and G1 by the FMA while the following generations till planting are in charge of the Regulatory Council of the PDO. So, the present populations of Tavella Brisa have a nearly complete uniformity into population, while keeping variability between populations. Self-production of seed for planting by farmers has nearly disappeared except in garden crops.


The conservation of the integrity of the varietal type is carried out mainly by the Regulatory Council of the PDO Fesols de Santa Pau, in collaboration with the FMA, as mentioned above. These guarantees the conservative selection of the inbreds most accepted between farmers and the homogeneity inside population. As in the case of other varieties labelled with European geographical denominations, the regional government of Catalonia helps in some of these tasks. Trials to optimize the management of the landrace and demonstration fields are also sponsored by the regional government. In the future the main challenge is the obtainment of new derived varieties with resistance to fungal diseases, the increase of the tolerance to drought and the increase of the proportion of unbroken seeds during cooking and/or sterilization.

Much of the production is sold directly to restaurants where it is used as an accompaniment to grilled meats or in traditional dishes (the area has a renamed gastronomic tradition, named ‘volcanic cuisine’, where beans have an important role - https://www.cuinavolcanica.cat/ca). Another part of the production is sold in an annual fair hold in the Santa Pau municipality (https://fesolsdesantapau.cat/historia-fesols-de-santa-pau/). Finally, a minor proportion is transformed into sterilized preserves or sold in markets, previously cooked. Due to the low total production since the existence of the PDO, the name of the landrace has nearly disappeared from the markets of other towns. This is good news because is the direct consequence of the PDO label that has won the battle against the fake (Photo 2).

Low optimal area of cultivation, medium but erratic production, and high demand, due to optimal sensory characteristics, give as a result high prices in the market. The fight against fake launched after the PDO establishment has even increased the prices as an enormous amount of the product in the markets has been obliged to change the name. So, this is a paradigmatic case of the benefits for farmers derived from the European geographic labels.

The regional government provides aid for the promotion of the Tavella Brisa and the other varieties accepted in the PDO. It also helps for the demonstration trials of new management methods and new inbred lines within the varietal type. Other public institutions as Diputacio de Girona, Parc Natural de la Zona Volcánica de la Garrotxa, and the Santa Pau municipality, have sponsored the studies that led to the obtainment of the PDO, and the selected inbreds. From the scientific and technical point of view, the FMA of Barcelonatech (http://fundaciomiquelagusti.com/es/ ) has led the activities. A representative sample of the inter and intra-population variability and all the new varieties derived are conserved in the germplasm bank of the FMA in Barcelona. In turn, a subsample of the variability (6 accessions) is conserved in the germplasm bank of the CRF, of INIA in Alcalá de Henares (http://webx.inia.es/web_coleccionescrf/ ).

The regulation of the market as a consequence of studies on genetic variability and the selection of new inbreds has stopped the self-multiplication by farmers. This has cut the introgressions of foreign germplasm that were usually cultivated by the same farmers without a safety distance between varieties. The strict controls of the multiplication of the selected inbreds guarantees that the germplasm remain inside the limits of the ideotype and that the enlargement of the genetic base of the landrace is made after consensus, always maintaining the characteristic traits of the landrace and its special relationship with the environment.

The centre responsible for storing the collected accessions and the inbreds resulting from breeding programmes, is the FMA. This institution is also responsible for the regeneration of the accessions and provides small samples to entities that request it for scientific studies. The FMA is also in charge of the controlled multiplication of the first generations of the new selections and distributes them to the Regulatory Council of the PDO, to carry out the last multiplications before planting.

The FMA has worked together with the farmers who were first linked to the Tavella Brisa Cultivators Association and later to the Santa Pau  PDO Regulatory Council (https://fesolsdesantapau.cat/), for the past 20 years. Our thanks to the numerous farmers who during this time have ceded their fields for trials, have attended participatory breeding sessions and who, with their effort and dedication, have managed to get control on a product that can be easily confused if we only look at the external aspect of the seeds. Our special recognition to the people who accompanied us all these years and specially to Miss. Montserrat Miralles and Mr. Lluis Sunyer, the president of the Association of Farmers and the Regulatory Council during all this time (Figure 3).