Currently, it is not possible to exactly establish when ‘Sedano Nero di Trevi’ has been introduced in the traditional cultivation area; however, documents report its cultivation within the municipality of Trevi (Perugia, Umbria Region) at the end of the 19th century. Quality of the product and adaptation to the area are among the possible reasons for its maintenance across time.

Plants are relatively high (50-58 cm) characterised by a number of leaves varying from 21 to 26. The colour of the leaf is dark green (after it, the name of the landrace which means ‘black celery’). The longest leaf is about 53-67 cm long (Torricelli et al. 2013).

As the size of the seeds is very reduced and relatively high temperature are needed for germination (minimum 7°C, optimal 20°C), the sowing is carried out indoor, in trays using 1-2 g/m2 of seeds, between the end of April and the beginning of May. If temperatures are optimal the germination occurs in 8-12 days. When plants reach a height of circa 15-20 cm and 4-6 leaves are fully developed, they are transplanted outdoor (generally at the end of June/beginning of July). Plant are arranged in single or double rows, with an optimal density of 4.5-6 plants/m2.

In order to reduce pigmentation, 20 days before the harvest (end of August) petioles (that are the edible parts) are covered using soil (or other materials). This process, called ‘imbiancatura’ (literally ‘whitening’), also reduces the content of petiole’s filaments (mechanical fibres) and at the same time makes petioles crunchier. The harvest is carried out manually in October (Castellini et al. 2008). 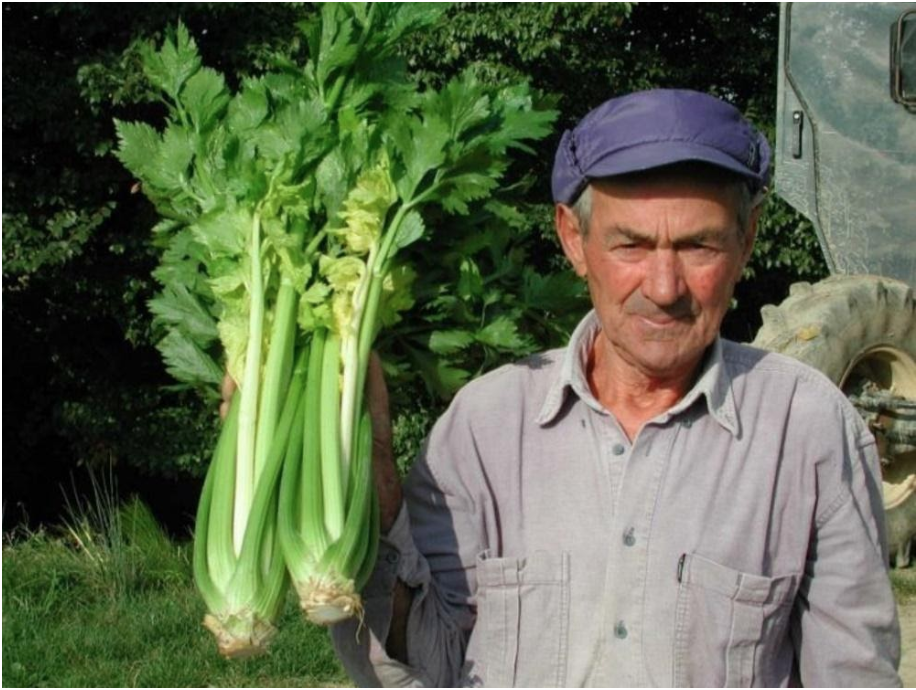 ‘Sedano Nero di Trevi’ is cultivated in the ‘Umbra’ valley (Umbria Region, Province of Perugia), between Santa Maria di Pietrarossa and Borgo Trevi, North to South respectively and from the Flaminia road and the river Clitunno, East to West respectively. The traditional cultivation area, also known as ‘Canapine’ (meaning ‘the place in which hemp is cultivated’) is an alluvial valley. The soil is rich in organic matter and characterised by an optimal texture; moreover, the good availability of water makes this area, particularly suitable for vegetable production.


Within the cultivation area a few farms produce ‘Sedano Nero di Trevi’: in each farm, the cultivation area destined to this landrace can vary from 0.15 to a maximum of 3.5 ha (average 1.2 ha). In the smallest farms it is quite common to only cultivate ‘Sedano Nero di Trevi’ (Castellini et al. 2008). Each farmer produces his seed and they do not exchange seed lots at all.


Although celery is a cross pollinated plant, the level of differentiation among farmer populations is high. Each farmer selected his own ideotype throughout many generations. Briefly, each year, each farmer applies phenotypic selection identifying the ‘best’ three/four plants (according to their own ideotype) that are kept on the field to produce seeds for the following growing season. These plants are maintained isolated from other celery varieties or other interfertile species (applying spatial isolation of at least 500 m).

As consequence of farmer selection procedures and of microenvironmental selective effects, the landrace appears to be structured as a metapopulation in which a substantial differentiation is maintained at the subpopulation level.

An appropriate on-farm conservation of a structured landrace like ‘Sedano Nero di Trevi’ then requires that subpopulations be maintained on the farms from which they come (Torricelli et al. 2013).

The landrace is very appreciated on the local market (Umbria Region), also due to the several initiatives carried out by local authorities to save the landrace by promoting its cultivation and market (see below ‘Added value’ and ‘External support’).

In order to encourage the cultivation and promote ‘Sedano Nero di Trevi’ on the local market, the association named ‘Pro Trevi’ established a festival during which the product is directly sold by the farmers and a prize is assigned to the best farmer. The event takes place in Trevi (Perugia) every year, in October.

‘Sedano Nero di Trevi’ also caught the interest of the Slow Food movement which included it among its ‘presidia’ in 2008, and, within a few years, it became a must in many top restaurants, even outside the Umbria Region.

This landrace has been also recognized as ‘Prodotto Agroalimentare Tipico’ (PAT, litteraly Typical Food Product) by the Italian Ministry of Agriculture and Forestry through technical support of Region Umbria. The PAT recognition is based on evidences that demonstrate the use of a landrace (or a processed foodstuff) in a certain area for at least 25 years.

In 2014 ‘Sedano Nero di Trevi’ was included into the ‘Registro Regionale delle Varietà Locali’ (‘Regional Register of Landraces’) of Umbria Region, in the implementation of the Umbria Region Law (n. 25, 2001) on genetic resources.

These activities led to an expansion of the landrace cultivation and increased farmers’ income.

Accessions of different ‘Sedano Nero di Trevi’ are kept, under long terms storage conditions in the germplasm bank of the Department of Agricultural, Food and Environmental Science of the University of Perugia (FAO ITA-363).

Provisions set by the national, regional and local authorities, the high quality of the product, the increased perception of the landrace value and a renewed interest in agriculture give hope to on-farm conservation in the next future.

Uncertain. To have access to the resource ‘Regione Umbria’ (http://www.regione.umbria.it/agricoltura) or ‘3A-PTA’ (http://www.parco3a.org/pagine/contatti-004) should be contacted.

Most of updates have been communicated by Dr Gildo Castellini (Liceo Scientifico ‘Galilei’, Perugia).