The landrace ‘Kremmydi Thespion’ is cultivated at the valley between Elikona and Kitherona mountains at the area of Thespion (Region of Central Greece, Regional Unit of Boeotia). The first reference for the cultivation of the onion was from Hesiod, while since 1911 we have reports for the cultivated lands. In particular, in 1911 the cultivation area was 155 ha and till 1939 it was increased to 450 ha (Anagnostopoulos 1939). The areas were watered from Thespios river. The latest data regarding the cultivations of the area reported that in 2011, horticulture covered 296.3 ha of the total cultivated land of the Prefecture and 60% of this area is dominated by the onions of Thespies (Region of Central Greece, Directorate of Rural Economy and Veterinary data).

Within the cultivation area, sowing starts in mid-January and ends in late March. The plants are sown in rows. The watering frequency increases as the plant grows and the temperatures go up. Although water and fertilization need of this variety are much lower than other varieties and the yield is higher even in arid soils. It matures at the end of June when the leaves lie down. Then the farmers dig the bulbs out and place the whole plants in rows until the leaves are dried. At the end of July, the harvest begins and ends in a month when the onions are gathered into pokes, while small quantities are sold by the traditional method in ‘plexoudes’ (braids). The production for onions is 30 tonnes per ha and for small bulbs ‘kokkari’ 15-20 tonnes per ha.

Onions of Thespies have the following characteristics: medium number of leaves per pseudostem, with erect or intermediate foliage attitude, medium degree of leaf waxiness, medium green colour. The shape of the mature dry bulb is slightly oblong, conical, the outer bulb skin colour is copper-brown and the bulb flesh colour is white. The size varies from 10mm-60mm (set: 10-18mm, big set: 19-26 mm, ‘stifatho’ size 27-40 mm and onion>40mm), depending on the planting density and the use of the onion. The uses of ‘Kremmydi Thespion’ are the following: the set is used mainly for planting and gives fresh onions, the stifado size bulb, is widely used for its ability to be cooked without melting and without tanning, and consists an excellent ingredient for both traditional cuisine and the ‘novel’ cuisine in different recipes, while the onion is used for people who prefer spicy cuisine. It has a strong taste, due to a high concentration of essential oils and is characterized as a long day variety. ‘Kremmydi Thespion’ is superior to other varieties due to higher resistance to long storage, lower humidity percentage that makes the bulbs more cohesive and able to keep their taste and freshness and more intense flavor.

The Agricultural University of Athens conducted analyses for the compounds that give to ‘Kremmydi Thespion’ the unique taste, the high nutrition value and the essential role for human health at the different sizes of the onion. The antioxidant capacity was estimated too, while the total phenolics, flavonoids and anthocyanins content of onions were specified. 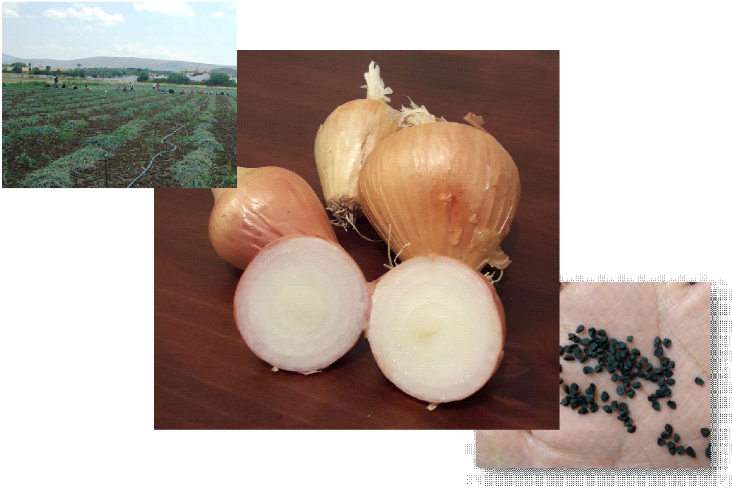 Traditionally ‘Kremmydi Thespion’ was cultivated at the valley between Elikona and Kitherona mountains at the area of Thespios since the beginning of the 20th century. Nowadays the cultivation of the landrace is carried out in the same area and is particularly concentrated in the fields around the villages Thespies, Neochori, Ellopia, Leontari, Loutoufi, Lefktra, Kaparelli and Melissochori (Region of Central Greece, Regional Unit of Boeotia).

The soils in this region are sandy-clay-loam, medium alkaline with pH 7.5 to 8, rich in calcium and potassium. The fields contain deposited materials from the rivers of the area, Thespio or Kanavaris and Permessos. The area has its own microclimate due to geographical location with cold and wet winters.


The economic development of Thespies is based the last 50 years on the cultivation of the ‘Kremmydi Thespion’ landrace. All rural families are primarily occupied with this. It is a part of their tradition and life.


Plants of ‘Kremmydi Thespion’ are multiplied by the ‘mparouti’ (meaning the gunpowder) which is the seed produced from the ‘manes’ (meaning the mother onion). Each farmer selects the most ‘impressive’ onions every year and plants them from November to February. They bloom in the spring and create a flower head. When the flowers are dried, they cut them and store them until the seed are dried too. Then they shake it and store it in a shady, well ventilated, dry place and they can use it as propagation material for the following season. Its germination capacity is good for the next two years. Due to the know-how of local farmers and the tradition that exists, the seed remains stable over the years.

Since ‘Kremmydi Thespion’ was registered in the National Catalogue of Landraces according to the EC Recommendation 2008/62/EU of the 20th June 2008 (L 162)’ and the Joint Ministerial Decision (Government Gazette B 2038/21.9.2009) the Agricultural Cooperative is responsible for the conservation of the landrace.


The landrace management relies completely on farming activities within the area.

The market of ‘Kremmydi Thespion’ is mostly local and national. The landrace is commercialised as row product (i.e. sets, bulbs and onions). They use it for the preparation of typical greek dishes, such as ‘Stifado’. The main concern of the farmers now is to find ways to increase the attention of the other European and non-European markets. Most of the farmers sell the products using distributors (personal communication with Panagiotis Dritsas, representative of the Agricultural Cooperative of Thespies and farmer).

Each summer, the ‘Onion Festival’ is the most important cultural event. All actors are involved and the participation of people is wide. The traditional onion-based dishes (‘stifatho’, pies, etc.) are served to everyone’.

In 2016, an application was made from the Agricultural Cooperative of Thespies to the Variety Research Institute of the Cultivated Plants of the Ministry of Rural Development and Food for the registration of the onion in the Catalogue of Conservation Varieties according to the EC Recommendation 2008/62/EU of the 20th June 2008 (L 162)’. Recently it was accepted and it resulted as the first Greek registered landrace in the Catalogue.

The Genebank of the Institute of Plant Breeding and Genetic Resources (Hellenic Agricultural Organization-DEMETER) collaborated with the Agricultural Cooperative of Thespies for the registration of the landrace to the Catalogue of Conservation Varieties. The Agricultural University of Athens carried out a study for the analyses of onion compounds.

Accessions of ‘Kremmydi Thespion’ are kept, under long terms storage conditions in the Genebank of the Institute of Plant Breeding and Genetic Resources of the Hellenic Agricultural Organization-DEMETER and in the Agricultural Cooperative of Thespies.

Provisions set by the Hellenic Ministry of Rural Development and Food, the local association, the high quality of the product and the increased perception of the landrace value give hope of on-farm conservation in the next future.

Most of updates have been communicated by Panagiotis Dritsas (Agricultural Cooperative of Thespies), Greece.