It is a late cycle onion and a white pulp variety, straw yellow skin (‘cataphile’) and elongated bulb, with low acidity and low dry matter content. Spike-resistant (low bolting expression) and good post-harvest conservation. It is a mid-season variety of (semi-early) and intermediate days, open pollination and seed propagation. Sowing takes place between February and March, or between November and December. Harvest time is August. 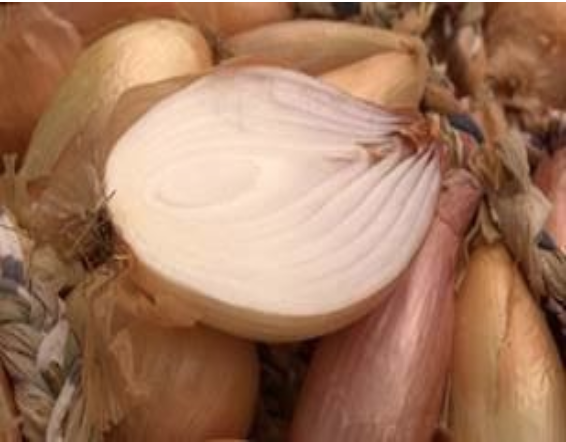 
Ader-Sousa (https://adersousa.pt/) is the association in charge of maintaining the traditional onion ‘Garrafal’ in the National Variety Catalog (CNV). ‘Garrafal’ landrace originated the Vale do Sousa onion which is produced from an herbaceous plant with a waxy leaf and fasciculated root. This onion landrace has an elongated (broad elliptical) shape, the bulb is large and of medium diameter. The dominant color of the dried bulb scales is brownish to roasted yellow. The intensity of the dominant color of fresh scales is clear. It is sown in the winter, the ‘onion’ is then transplanted to the field in March–April and, is harvested in August–September, aiming at its sale at the fair of S. Bartolomeu and N. Senhora das Vitórias.

It is widely used in the local cuisine, where it goes with various typical dishes and deeply associated to this territory. It is still traditionally consumed at local events as fresh, peeled, cut into four pieces, soaked in the region's red ‘green wine’ and seasoned with a pinch of salt and a little olive oil.

Reports note that its local marketing was already happening in the XVIII century, in the ‘Vale do Sousa’ region. At the end of August, in Penafiel, an onion fair is held; its patron is S. Bartolomeu, who in the night of 23 to 24 releases the devil. (…) (Source: Penafiel One Hundred Years ago I -1890-1894). Also in Felgueiras, an onion fair is held, deeply related and dedicated to our Lady of Victories, dated from 1924’.


It is sown in the winter, the ‘onion’ is then transplanted to the field in March–April and, is harvested in August–September.

Product availability throughout the year. In addition to the importance it has in the economy of the Vale do Sousa and Tâmega, where it is produced in large quantities, this landrace is a noble product, being part of the great majority of the dishes of the region.


The landrace management relies completely on farming activities within the area. Currently, technical or scientific support is provided by the Ader-Sousa association.

The centennial fair of the onions of Penafiel (fair of St. Bartholomeu), singular in the country, demonstrates the importance of the product in the region.

This traditional variety is included in the National Catalog of Varieties of 2019, published by ‘Direção-Geral de Alimentação e Veterinária’ (DGAV), as a conservation variety.

It is currently a very important genetic resource to local populations and is maintained on-farm.