Bere barley (Hordeum vulgare) is a six-row landrace crop cultivated across Orkney (Scotland) by landrace maintainers in small sections of land on crofts. It is likely that it was introduced into Scotland by the Norse and dates back to the 8th century (sasa.gov.uk, 2019). Today it is grown by a small number of maintainers across the islands. It is a fast-growing crop with an early harvest, often planted in May or even April and harvested in the summer, which suits Scotland’s short growing season. For this reason, it is known to many locals and maintainers as the ‘90-day’ crop (Wright, Dalziel and Ellis, 2002). 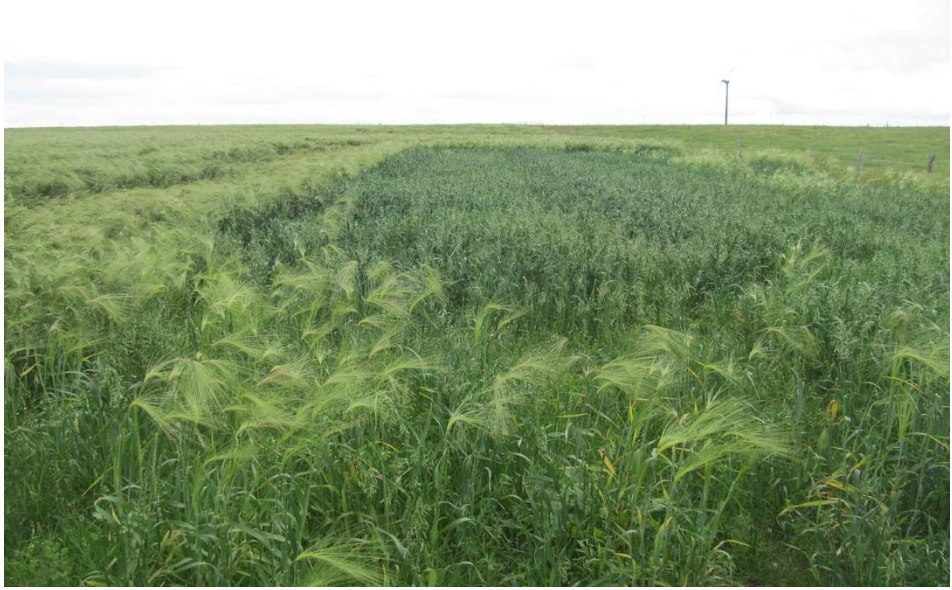 Photo: ‘Bere barley’ being grown on an area of less than one acre, surrounded by a larger area of modern crop cultivars. Photo by Olivia Shoemark.

At one time Bere barley was grown widely across Scotland but its growth is now predominantly restricted to Orkney, with some small areas on Shetland and the Outer Hebrides. It is generally cultivated in small areas of land on crofts, usually ranging between a few acres and a few hectares.


The main cropping constraints facing maintainers of bere are its tendency to lodge as well as the low yield (2.8 to 3.8 t/ha) it has in comparison to modern barley cultivars (Martin, Chang, and Wishart, 2010). It is also described by maintainers on Orkney as being difficult to work with using modern threshing machinery, meaning many potential maintainers avoid it to avoid the cost of buying traditional machinery.

Despite its difficulties, bere is a low maintenance crop which tolerates the acidic and low nutrient soil found locally (Mahon, McGuire and Islam, 2016). Enriching the soil in any way often leads to increased grain size and longer stems, thus increasing instances of lodging. For this reason, generally once the crop is sewn maintainers can leave it until it’s ready for harvest without any agricultural inputs. The only input, if any, that is usually considered for bere cultivation is the addition of plant growth regulators as these can prevent stalks from becoming too long and thin to properly support the head of grain.


Bere is a self-pollinating cereal crop. Unlike most modern barley varieties which are readily available from seed merchants, bere seed is harder for prospective growers to locate. Most growers save a portion of seed from each year’s crop and store it for the next year, and there is some swapping of seed amongst growers. Seed is also available to some growers from Dr Peter Martin of Orkney College UHI.

As a result of this seed saving the bere on Orkney is extremely well adapted to the local environment, coping well with the Archipelago’s high latitude and open, exposed topography (Dry and Bell, 2016). As a result of seed saving and swapping there is a high degree of genetic diversity amongst bere populations (Sasa.gov.uk, 2019).

If a crop fails and maintainers have participated in SASA’s Scottish Landrace Protection Scheme, they may have submitted seed from previous years. In this case they can request their seed back from SASA. It will be their own seed and so locally adapted to their land.


The landrace management relies on individual maintainers and work by the Agronomy Institute at Orkney College UHI.  It should be noted that bere barley is also grown in small areas on Shetland and the Outer Hebrides. On the Outer Hebrides it is rarely, if ever, as a clean crop, instead being grown in a mixed crop of barley (Hordeum vulgare L.), rye (Secale cereale L.), and oat (Avena strigosa Schreb) on Machair soil for use as animal fodder (Scholten, Spoor and Green, 2009). It is thought that each archipelago has one of three significantly different and isolated sub-populations (Southworth, 2007).

The Agronomy Institute at Orkney College UHI has been working since 2002 with Orkney growers and potential market collaborators to conserve this particular landrace. The department is led by Dr Peter Martin, whose efforts have established a local supply chain that feeds into a few breweries, distilleries, and bakeries, thus stimulating the production of 60 tons or more a year of bere (Uhi.ac.uk, 2019; Martin and Chang, 2007). This has been achieved by identifying relevant market outlets and capitalizing on interest in ‘traditional’ food products.

Barony mill, a 19th century water mill, has also contributed to the preservation of bere and bere cultivation practices as it ensures the growing of around 50 acres to provide grain for milling processes, and then sells the meal to bakeries and meal products to tourists.

Bere barley is registered as a conservation variety in the European Common Catalogue of Conservation Varieties and is also of interest in the Slow Food movement (Food Safety - European Commission, 2019; Slow Food in the UK, 2019). In order to encourage the cultivation and promote bere on the local market, Peter Martin of the Agronomy Institute at Orkney College UHI have been working with growers and market collaborators since 2002 to stimulate interest and have successfully seen a rise in numbers of products created and sold with bere as a component. In addition to this, Barony Mill contracts out the growing of around 50 acres and mills the grain produced, selling the meal to bakeries and meal products to tourists visiting the mill.

In 2003 the University of Birmingham carried out a survey of landraces across the Scottish isles which included bere barley. This was updated in 2018 in conjunction with the EU project Farmer’s Pride in order to understand how the cultivation of bere had changed over the 15-year period between the two surveys. The information gathered will help governing bodied understand how best to optimize incentives for in-situ conservation by maintainers.

As it is a six-row barley, any land used to grow bere barley is eligible for rural payments from the UK government (GOV.UK, 2019).

The Scottish government is committed to protecting its plant genetic resources under various international treaties such as the Convention on Biological Diversity (CBD) 1992 and the International Treaty on Plant Genetic Resources for Food and Agriculture (ITPGRFA) 2004. As a result, the Scottish Landrace Protection Scheme was set up at SASA in 2006 and includes bere barley in its collections to safeguard local adaptations in seed and prevent farmers having to buy in seed should a crop fail (Sasa.gov.uk, 2019). This means that local adaptations are retained. As of 2008 the SASA cereal landrace collection held 49 bere accessions.

Work by Peter Martin and those at Orkney College UHI has increased the commercial value of the landrace and contributed to the renewal of interest in bere on the islands, giving hope for future conservation of this landrace.

Bere exists in several collections including the Nordic Gene bank in Sweden, the Institute of Plant Genetics and Crop Plant Research in Germany, and the United States National Plant Germplasm System.