The landarace Rosa Romana is very ancient apple cultivated on the Apennine mountain of Bologna Province; it has been reintroduced in this area around 2000. Probably Etruscans brought this apple in northern-central Italy, close to ‘Etruria’, the name of Bologna in that period. In Italy apple varieties, existing during Roman period, were grown until the beginning of XX century, when America cultivars were introduced and replaced old landraces; however, Rosa Romana was the most cultivated variety in Apennine, until the ‘50s (Breviglieri 1949).

Regarding the landrace, fruits ripens in October and are of a typical flat shape, large size, green coloured, with 60% of crimson stripe red. Flesh is firm, only lightly crisp, juicy, very fine, with intense aroma. The taste is very different from modern apple commercial varieties.

Rosa Romana fruits are very easy to be stored: starting from October it is possible to maintain fruits at 2-5°C until spring using both refrigerated chambers or other non-artificial approaches like in the past: currently some farmers are trying to store fruits in underground caves. It seems that ‘natural storage’ allows a better smell and aroma to be retained.

Trees are not too much sensitive to apple scab, so in the mountain area it is possible to grow fruits applying few treatments; Rosa Romana is also cultivated under organic conditions where some fruits show spots and sometimes presence of larvae.

Molecular markers showed that Rosa Romana is quite different from new varieties and at the same time very close to some ancient roman landraces, such as Decio and Appio, still maintained in living collections (Liang et al 2015).

Some individual plants have been found scattered over the original area of cultivation; all of them were characterised by similar phenotypes (Alessandri et al. 2017).

In general, Rosa Romana apples are traditionally cooked or used for the preparation of apple pies; it is also common to store fresh fruits in wood box or in cellars for their consumption during winter. 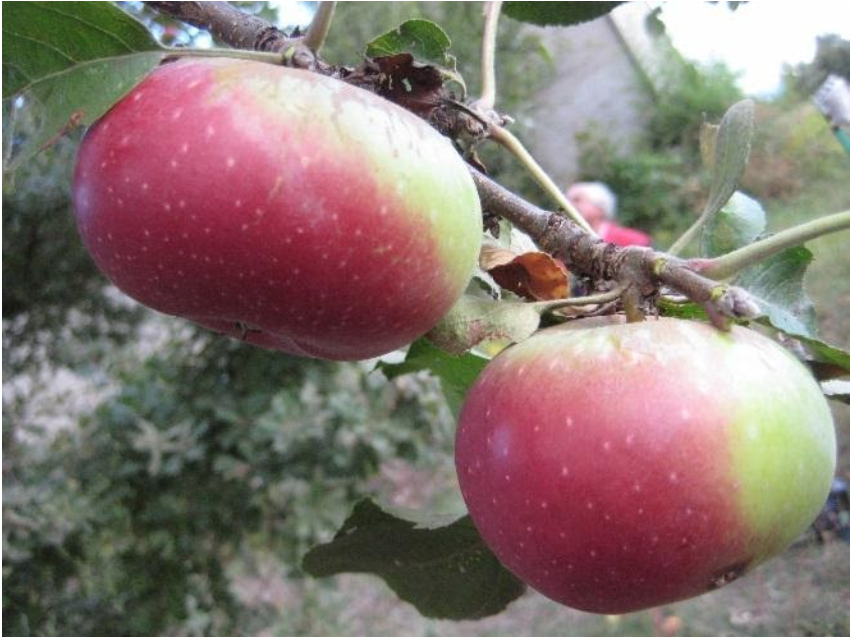 The original area of cultivation is on the Apennine mountain in the province of Bologna (from 300 to 1000 m a.s.l.), where it is still possible to find secular trees (even in private gardens located in historical small villages). Old commercial orchards were characterized by low density, with 8 m of distances among trees, often in rows, placed at the boarder of fields.


Traditionally, in the original area of cultivation, every farmers used to grow Rosa Romana for home consumption and for selling fruits on local markets; unfortunately over the last fifty years many traditional local markets disappeared. Recently, a farmers’ Association named ‘Associazione Rosmana’, was created in order to reintroduce Rosa Romana in the orchards of the traditional area of cultivation and promote sales on the market. New orchards were recently planted using modern criteria while trying to favour organic cultivation management. Over the last years about 4-5 hectares of Rosa Roman have been planted. Some farmers together with some associated local retailers decided to produce apple juice using Rosa Romana.


As Rosa Romana is very vigorous, in the past it was grafted on the wild apple rootstock. Nowadays, clonal rootstocks are preferred: M9 has been used for irrigated high-density orchards while M111, has been used for non-irrigated orchards on clay soils. Scionwoods are usually taken from individuals that have been characterised showing best features; the material is grafted onto clonal rootstocks in nursery (in September). After 18 months the material is ready to be transplanted. For each plantation (orchard) 3 or 4 clones (mother plants) are used to somehow ensure variability.


The landrace management relies completely on farming activities of the farmers grouped in the association ‘Associazione Rosmana’ that holds a database with information of all the orchards and the plants within the members of the association itself. The association also established guidelines for production and disease management.

This apple is still appreciated by local consumers for its particular taste that remembers apples of the past. Nowadays the potential of the market is increasing because of a renewed general interest on old varieties and landraces. Very high level of antioxidants is another element that brings new attention to Rosa Romana from consumers.

‘Regional agrobiodiversity law (N.1/2008) should ensure ‘guardian farmers’ subsidies to maintain trees of varieties included in regional register. However, considering the limited number of trees and the total planted area compare with other crops such as cereals and vegetables subsidies result not sufficient, and farmers do not have interest in having an official recognition. It seems necessary to change criteria and increase subsidies for the conservation of traditional fruit tree genetic resources. In 2019 a DRP short chain project was realized and is currently waiting endorsement by the regional office of agriculture. This approach seems the only way, at the moment, to promote and development reintroduction and cultivation of landraces within this area. Many organizations are involved in the project: Universities and Research Centres for Agriculture, retailers, supermarket organic chains, processing industry, farmer associations and Local Groups Action.

Rosa Romana represents very long tradition in terms of apple cultivation in Apennine area of Bologna. Every farm keeps some old trees and local communities take part with large interest to reintroduction project and official events aiming at promoting this landrace. Some farmers, members of Rosa Romana Association decided to plant new orchards while others to maintain and restored their old ones by new pruning, propagating clones and replacing old non-productive plants with some new trees. Local organisations promote the knowledge of this landrace trough tours of farms during the harvest. It seems that all these activities together are sustaining the reintroduction of this landrace into its original cultivation area.

A special thanks to the members of Rosa Romana Association (Associazione Rosmana).