A corn rich in tradition whose cultivation in the Rhine Valley dates back to the 17th century. At times it was cultivated in fields and gardens by almost every family in the Rhine Valley. In the course of the centuries a great genetic diversity developed, which led to the maize population preserved today. A simple, coarse-grained corn dish, the Ribel, is made from the grains. In Switzerland, maize has been cultivated in the St. Gallen Rhine Valley since the 17th century, where it thrives particularly well due to the warm and humid climate and the favourable influence of the Alpine foehn. The cultivated plant was cultivated in the Rhine Valley mainly as corn for consumption and not as corn for cattle as in other arable farming areas. In this region an independent maize culture has developed, which led to the fact that in the middle of the 19th century already two thirds of the Rheintaler arable land were used for maize cultivation. 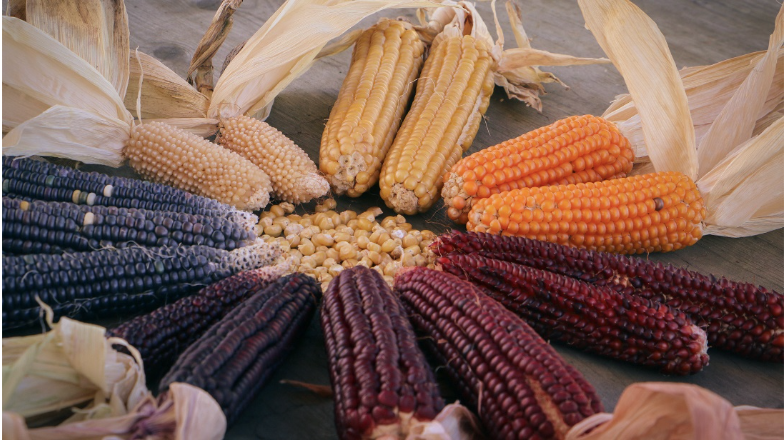 The area where Ribelmais is grown is limited to the north-south Rhine valley above Lake Constance:


The landrace Ribelmais used to be grown by families with a garden or a small field as well as by farmers alike. Nowadays professional farmers, processors and consulting experts are associated in the ‘Rheintaler Ribelmais’ association.


Corn is a strict cross-pollinated crop that is pollinated by the wind. All maize varieties can crossbreed. As isolation distance at least 1000 m must be kept, better more. Take the cobs for the seed harvest from the middle of the crop. In all regions with maize cultivation there can be crossings of commercial varieties from surrounding fields, since maize pollen can fly for miles. In this case, only the laborious manual pollination remains. The different appearance of the grains usually indicates the presence of crossbreeding between varieties as early as the first year. Maize reacts sensitively to inbreeding, therefore as many plants as possible should be cultivated for propagation, at least 200, better more.


There have been around 80 accessions collected. The ‘Rheintaler Ribelmais’ association is very engaged in keeping this landrace and the many accessions alive. The organisation is involved in analysing and breeding projects in order to better understand population genetics and to describe the characteristics of the landrace, as well as to do selections for developing healthy and productive populations.

‘Rheintaler Ribelmais’ has been experiencing a renaissance over the last few years. Overall production in 2005 in the Reinthal region was 30 tonnes, part of which went to local restaurants, bakeries and breweries, while the other part was sold through retail businesses, both locally and nationally.

The Swiss MOA (Ministry of Agriculture) supports professional conservation efforts and projects for analysing and enhancing this landrace.

The strict cross-pollinating nature of corn let develop many different populations over the centuries that probably were each kept by close living farmers if not by whole villages. However, presumably populations were in constant exchange as pollens can fly distances of several kilometres. With the upcoming of modern hybrid varieties in the late 20th century also in the regions of this landrace the accessions very likely got mixed up with genes of modern maize varieties. At least until the founding of the ‘Rheintaler Ribelmais’ association, who cares for the true conservation of the collected accessions since the late 1990’s by governmental support.