‘The Portuguese folknames used for the different morphotypes of ‘Couve-Galega’ are closely related to:

During the Middle Age, the consumption of vegetables was not very common among the rich classes. Fresh vegetables would be especially appreciated by the elements of the poorer classes. ‘Caldo verde’ soup potato broth and kale (‘Couve-Galega’) originated in the mid-15th century and the kale production started in the northern provinces of Portugal, specifically in the Minho region. Over the years, the recipe was adapted according to the regions in which it was prepared. It has turned into a traditional Portuguese dish much consumed during winter nights, in popular parties in Portugal and also in Brazil and others Lusophone countries. This type of kale is also used in a traditional recipe called ‘feijoada’.

‘Couve-Galega’ has a large variability. There are morphotypes, all with white petals, with smooth and curled leaves, leaves dark green to green or more or less waxy (blue gray green) and with various heights according to different juvenile periods and vernalization requirements. It has plenty of large leaves with long petioles, leaves can be curly or smooth, forming no head, and a long stem reaching over 1 m high at mature stage before bolting. Emission of leaves occurs during the last two years, as flowering needs vernalization. Fruitification only occurs in the second year. However, there are morphotypes of greater persistence called ‘kale of seven years’ which continue to form new lateral leaves. The shape of the plant is an inverted pyramid-dome or pyramid. 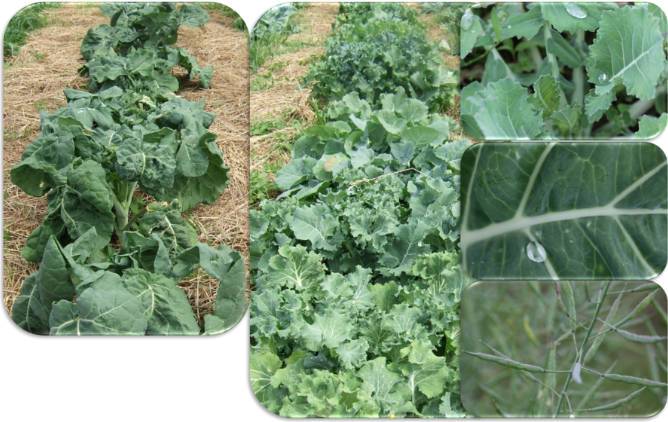 It is a metapopulation present across the country (mainland and islands). Until today ‘Couve-Galega’ is present in a large number of countries as a very important crop in the Portuguese horticulture, due to their excellent adaptation to prevalent climatic conditions and good integration into small farming traditional cropping systems.


The variability of ‘Couve-Galega’ is expressed by the date of flowering, if leaves are curly or not, and the number and length of internodes. Variability of this landrace depends on where it is grown, its environmental conditions and their effect on the growth cycle, but it is always cultivated in low-input conditions.

This landrace and all morphotypes, can be sown every month of the year. Sowing is usually done in seedbeds and the final location is chosen depending on the sowing season (summer/winter). Watering is manual. When planting, the soils should be rich in organic matter content and, in armed in bed. Planting should be with 0.4 and 0.4 to 0.7 m between plants, for better leaf development.

This landrace is still found in thousands of backyards and vegetable gardens in the center and in the northern part of the country. It, however, appears to be endangered, as it was only cultivated by older farmers, in small farms where the polyculture is the main characteristic. Each farmer inherited this landrace from his parents and has always multiplied his seeds without exchanging them. Its horticultural importance can only be translated by unquantified assertions such as: ‘Galega kale is an omnipresent cole in Portugal’... ‘if any Portuguese citizen can have at least a single square meter of backyard, he will immediately grow there several plants of Galega kales’.

The metapopulation of this landrace evolved in Portugal due to different selection pressures which differ in ecological adaptation, growing cycle, morphological characters (Dias et al., 1993, 1995) and disease resistance (Ferreira et al., 1993; Dias et al., 1993a). Portuguese kales were found to have higher levels of protein, Ca, and Mg, and glucosinolate content.


The care that growers had for selecting and isolating the plants for seed production has resulted in a high morphological variation within landraces making the identification of the prevalent morphotype a rather difficult task. As a consequence of the farmer selection procedures and of microenvironmental selective effects, the landrace appears to be structured as a metapopulation in which a substantial differentiation is maintained at the subpopulation level. An appropriate on-farm conservation of a structured landrace like ‘Couve-Galega’ requires that subpopulations be maintained on the farms from which they were originated.


The landrace management relies completely on farming activities within the area. Currently, no technical or scientific support is provided.

Recently there has been research on this landrace mainly in terms of bioactive components, nutrition and postharvest conservation. In terms of food and gastronomy, it is often included in new trends in food and recipes but without due emphasis, i.e. it loses in comparison to other kales of Italian origin.

No, research, evaluation and valorisation of this genetic resource are required.

Due to the high quality of the product, local associations and other public and private agents have an increased perception of the value of this landrace which, together with a renewed interest in agriculture in Portugal, gives hope for its on-farm conservation in the near future.

The access to this landrace can be done through the national genebank (BPGV, INIAV I.P).