L. clymenum, locally called ‘arakas’, is a landrace with historical origin, distinct identity, specific adaptability and it is closely connected with the traditional cultivation system on Santorini Island where it has been cultivated exclusively and continuously for more than 3500 years, while elsewhere it was known only as a wild plant. The archaeobotanical data support the theory of local origin and its continuity through culture and subsistence practices (Valamoti and Kotsakis 2007) and indicate that Lathyrus has been continuously cultivated in the Aegean region up to the present supporting the traditional farming and the low input rain-fed cultivation system for hundreds of years.

The dried legumes of ‘Arakas’ consist ‘Fava Santorinis’ a famous agricultural product of Santorini Island. The seeds are used to prepare a Greek dish called also ‘fava’. The production process of ‘Fava Santorinis’ begins with the cultivation of ‘arakas’ seeds of the plant species (L. clymenum L.) grown in the Santorini islands’ complex. This includes the basic stages of soil preparation, sowing and harvesting. The landrace is sown in December, shows a flowering in April, ripening and drying of the pods, locally called ‘louvia’, in late May and early June and the harvest follows. Its prostrate plant growth habit protects the plant from the strong winds. Each leaf consists of three pair of leaflets and tendrils, the flowers are white or purple, the shape of the pods is broad linear with slight restrictions of pods between the seeds, the shape of the seeds is square or rhomboid and the colour is brown-grey. The cotyledon colour (after removing the seed coat) is yellow (Guide for the identification of cultivated landraces, 2007). The processing of the harvested plants includes the basic stages of threshing, sifting and cleaning the seeds. Then the seeds are placed in appropriate areas to reduce their relative humidity to 13% and after 2-3 months the seeds are smashed and peeled. It has a very high nutritional value as it is rich in proteins (20%) and carbohydrates (>60%). The traditional method of its production which includes ripening in caves and drying under the sun, results its velvety texture and the slightly sweet taste. When weather conditions are good farmers on the island can reap about 800 kg of ‘arakas’ seeds per hectare. But generally it is a vulnerable crop, it can be destroyed by strong winds that blow away its flowers and reduce the yield, by drought or by sudden warm wind. Its production is thus limited making it an expensive crop for the farmer and the consumer. Its cost is four to five times higher that ‘Fava’ produced from fava beans or from peas.

The landrace is discriminated from other Greek and foreign Lathyrus landraces and commercial cultivars by morphological traits and molecular markers (Ganopoulos et al. 2012, Koutsika-Sotiriou et al. 2010, Traka-Mavrona et al. 2015). The phylogenetic analysis confirmed that the landrace ‘Fava’ of Santorini is genetical far from other commercial Lathyrus varieties and that it is a different and unique variety. This fact makes the product important for its future utilization mainly by farmers, who could use these new locally adapted populations using low inputs and potentially would be suitable for their use in organic farming systems. It has low requirements for irrigation and fertilization. 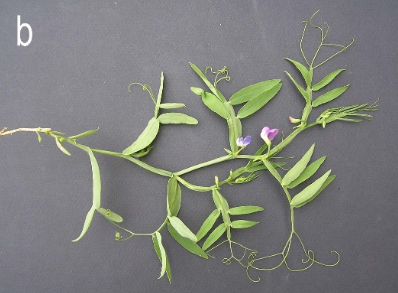 ‘Arakas for Fava Santorinis’ is traditionally cultivated in Thira (Santorini) island and other nearby smaller islands like Thirasia, Palia and Nea kameni, Aspro, Christiana and Askania (Region of South Aegean, Regional Unit of Thiras Island, Greece). The common characteristic of these islands that considered being responsible for Favas’ quality is the volcanic soil which makes up nearly all of Santorini consists of tertiary deposits of Thira soil, pumice and lava and a very specific dry and warm microclimate. More generally, the soil has a fine structure, a lack of basic minerals K and N, is extremely poor in organic matter and the soil water resources are minimal to non-existent. The annual average temperature is 17.50C, the days of sunshine throughout the year are 202, the conditions are dry, the total annual rainfall is 370 mm, the northern winds are strong (meltemia), the percentage of relative humidity is high (average annual humidity is 71%) and the frost is absent. Thus, the plants are under conditions of water stress, and this, together with the alkaline soil, gives the product special characteristics (https://eur-lex.europa.eu/LexUriServ/LexUriServ.do?uri=OJ:C:2010:034:0003:0007:EL:PDF). The landrace is maintained by few farmers in small, separate fields for a total of 1.5-1.8 hectares on Santorini and the neighbouring islands, in the Region of South Aegean (Greece), and it is part of the local tradition.


Since 1840, a total production of 1800 kg of ‘Arakas’ has been recorded and ‘Fava Santorinis’ was ranked fourth in the island's agricultural products after the wine, barley and cotton. However, lately the landrace suffered from genetic erosion and was threatened by extinction from field cultivation because it was only cultivated by few elderly farmers. It marginally survived at a small scale (on about 1.5-1.8 ha in the whole island), by a limited number of farmers, as part of their agricultural tradition.

Currently, however, the number of farmers still cultivating ‘Arakas for Fava Santorinis’ increased, possibly due to its addition in the European Catalogue of Protecting Designation of Origin Products. The farmers are part of the Union of Santorini Cooperatives–Santowines and through the Cooperative they manage to earn a better price and a promotion of their products.


L. clymenum is a predominantly self-pollinating plant, but significant levels of cross pollination can occur. The seeds gathered last from the threshing floor are kept separately in order to use them for the following year’s sowing. These seeds are characterized by their small size, which corresponds to the typical seeds of L. clymenum. Each farmer multiplies his own seeds under slightly different agronomic conditions.

‘Arakas for Fava Santorinis’ is well adapted to the volcanic ash of the island Santorini, but it has a low productivity and segregates for flower colour, i.e., purple and white, in a ratio 3:1. In recent years, the landrace has faced intense cultivation problems due to unstable yields and degradation of plant development suggesting a change in allelic frequency in an undesirable direction (Ranalli and Cubero 1997).

The Hellenic Agricultural Organization-DEMETER (Institute of Plant Breeding and Genetic Resources), the Aristotle University of Thessaloniki (School of Agriculture) and the Union of Santorini Cooperatives with the support of the Region of South Aegean tried to improve the legume landrace through the study of the existing variability, and an intra-landrace pedigree, combined with analytical selection, scheme (Koutsika-Sotiriou et al. 2010; Traka-Mavrona et al, 2015).


The landrace management relies on farming activities in the area and is supervised by the agronomists of the Union of Santorini Cooperatives-Santowines.

‘Fava Santorinis’ has a yellowish colour and flattened discoid shape with a diameter of about 2 mm and a maximum humidity of 13%. Its composition is characterized by a particularly high percentage of proteins and increased carbohydrate content. The traditional method of production which includes drying under the sun and ripening and the physicochemical characteristics of fava make it easily boiled (shorter cooking time is required) and ultimately add to the cooked Fava of Santorini and other dishes in which it is used, unique organoleptic characteristics, such as velvety texture and slightly sweet taste. It is used as appetizer, main or side dish. Undoubtedly, even today, it plays an important role in the gastronomic identity of the island and in the Mediterranean diet, as well.

Till recently it had a rich, local niche market due to the limited production. Hence, steps are made to increase the production and the promotion of the product to other European and non-European markets and the market for fava was expanded the last years, while people from all over the world can by on-line all the products of the Union of Santorini Cooperatives from its e-shop. Most of the farmers sell the products by the Union of Santorini Cooperatives or other private companies who are responsible for the packing and the labeling.

The unique ecosystem that was created by the volcanic explosions on Santorini island, the volcanic ash, the barren, sandy soil, and the resilience of the plant to poor drainage lands, humidity created by the sea, drought, heavy winds and its adaptability to the volcanic soil of the island make it a resource with an important agronomic and commercial value and optimal organoleptic qualities.

In 2010 ‘Fava Santorinis’ was registered into the European Catalogue of Protected Designation of Origin (PDO) products (EC No: EL-PDO-0005-0520-09.01.2006) following the COUNCIL REGULATION (EC) No 510/2006 on the protection of geographical indications and designations of origin for agricultural products and foodstuffs. The PDO ‘Fava Santorinis’ offers high income to growers since it is four to five times more expensive than regular ‘Fava’ coming from fava beans (Vicia faba) or from peas (Pisum sativum) locally called ‘arakas’. Furthermore, other cultivated Fabaceae such as V. faba subsp. major (cultivated for food) and subsp. minor (cultivated for feed) also called Fava, frequently could mislead the consumers. The same is true for peas whose seed products are locally called ‘arakas’ and for other Lathyrus spp.

For this reason, in 2012, the School of Agriculture of the Aristotle University of Thessaloniki and the Institute of Agrobiotechnology of the Centre of Research and Technology Hellas suggested a method using HRM (High resolution Melting) coupled with universal chloroplast DNA barcoding regions (Bar-HRM) in order to distinguish legume species (four Lathyrus, two Vicia and two Pisum species which potentially could be used as adulterants in ‘Fava Santorinis’ commercial products) and moreover to authenticate ‘Fava Santorinis’ commercial PDO products (Ganopoulos et. al. 2012).

A subsidy is given from the Ministry of Rural Development and Food the last years under a special scheme for the support of farmers who cultivate ‘Arakas for Fava’ on the areas of ‘Small Aegean Islands’ and specifically Santorini and Thirasia.

Currently, no scientific support is given to landrace maintainers but only technical support from the agronomists of the Cooperative. In the past, several initiatives have been carried out in an attempt to conserve and evaluate this landrace. Few years ago, in the framework of a national project the Hellenic Agricultural Organization-DEMETER (Institute of Plant Breeding and Genetic Resourses), the Aristotle University of Thessaloniki (School of Agriculture) and the Union of Santorini Cooperatives with the support of the Region of South Aegean aimed at improving this legume landrace through the study of the existing variability, and an intra-landrace pedigree, combined with analytical selection scheme. Also morpho-phenological and molecular characterisation activities were carried out to precisely describe the landrace.

The role of the Union of Santorini Cooperatives-SantoWines (https://santowines.gr/en/) is very important too. It was founded in 1947. Today, it consists of the largest organization of the island representing all the farmers and counting 1.200 active members. SantoWines is committed to safeguarding the local traditional cultivations, producing highest quality Protected Designation of Origin (PDO) Santorini wines and products as well as promoting sustainable agriculture development. The last years agricultural production, the cultivated land for araka and tomato, and the number of young members of the Union were increased.

Accessions of ‘Arakas for Fava Santorinis’ are kept, under long terms storage conditions in the Genebank of the Institute of Plant Breeding and Genetic Resources of The Hellenic Agricultural Organization-DEMETER and in the Union of Santorini’s Cooperatives-Santowines.

the Genebank of the Hellenic Agricultural Organization-DEMETER

(http://www.ipgrb.gr/index.php) and the Ministry of Rural Development and Food

Most of updates have been communicated by Christos Alexandris (Union of Santorini Cooperatives-Santo Wines), Greece.