In Greece, lentil's cultivation is dated back to the Neolithic era according to findings at the Franchthi cave in Peloponnese (Horneburg and Becke, 2008; Rutter 2017). Centuries of lentil cultivation in the diverse Hellenic landscape has led to the development of many landraces. However, landrace cultivation was replaced by new improved varieties, due to low yield, sensitivity to diseases (Chatzivassiliou et al. 2016) and low farmers’ income, leading to the inevitable loss of lentil genetic resources. On the other hand, few local landraces are still cultivated in small farms. The average yields of lentil's landraces are generally small, without irrigation 0.60-1 tonnes/ha, while with irrigation exceeds 2 tonnes/ha. The yield of the Greek improved varieties under appropriate cultivation techniques varies from 1.4-2.2 tonnes/ha (depending on the variety). An exceptional example is the 'Faki Eglouvis’ landrace that is exclusively cultivated at an isolated plateau (altitude 750–950 m) near the village Eglouvi in the Ionian island of Lefkada (Tsanakas et al. 2018). According to historic data cultivation of this microsprema type lentil landrace with traditional agricultural practices, is uninterrupted for centuries (before 1717 AD, as reported in Nikolaou and Maxted 2009), making it a rare example of on-farm conservation through traditional cultivation within the community (Thomas et al. 2012). Further, this lentil has superb characteristics, including good taste and boiling quality (Nikolaou and Maxted 2009).

The sowing of the lentils is done in two periods, in the beginning of January, if weather and moisture allow it or from February till March. Usually the women, from the village of Eglouvi, go to ‘Vouni’ (mountain), the plateau where the lentils are cultivated and they sow the seeds in a straight line. The lentils needs three-four months to germinate, grow and produce pods. The harvest of ‘Faki Eglouvis’ starts from early June to mid July. The harvested plants are transferred to the threshing floor, where they are left to wither. After the threshing begins the ‘lihnisma’ or ‘anemisma’, the separation of the seed from the straw with the help of the wind and few wooden tools. The sifting and cleaning of the lentils follow. Nowadays the only machine-driven process is threshing, which is done using a threshing machine. Finally, the lentils are stored in storehouses. The conditions there must be constantly the same. The temperature does not exceed 20-230C and the relative humidity must be low. Particular attention is paid to the storage of the seeds held for the following year. This sample should be in a dry place without humidity and with relatively low temperatures to protect its germination ability (Vlahou 2010).

The landrace has high seed phenotypic variation with seeds that form two chromatic classes (green and brown) with or without patterns or dots and two size classes of seeds larger or smaller than 3 mm. ‘Faki Eglouvis’ is a microsperma lentil variety with seeds that do not exceed 6 mm diameter. The advantage of the small grain varieties is that they mature earlier, in order to avoid drought. This main spherical, flattened or discoid shape is a further morphological characteristic of seeds grown in the plateau. Tsanakas et al (2018) examined the seed characters and revealed their high phenotypic variation. Morphological analysis was based on characteristics of the seed. The genetic variability within ‘Faki Eglouvis’ was evaluated with molecular data and its genetic profile was compared with the most widely cultivated commercial varieties. The results shown that this landrace has a unique genetic background that significantly differs from lentils' commercial varieties and no overlapping could be detected. Genetic variability within the ‘‘Faki Eglouvis’ landrace can be considered in targeted breeding programs as a significant phytogenetic resource of lentils in Greece.

The seeds of Englouvi’s lentil were inherited from generation to generation, they have been adapted to the particular soil and climatic environment and cultivated there for hundreds of years with the same cultivation methods and without using any kind of chemical fertilisers and pesticides as it is an organic cultivation. Irrigation is done using wells. 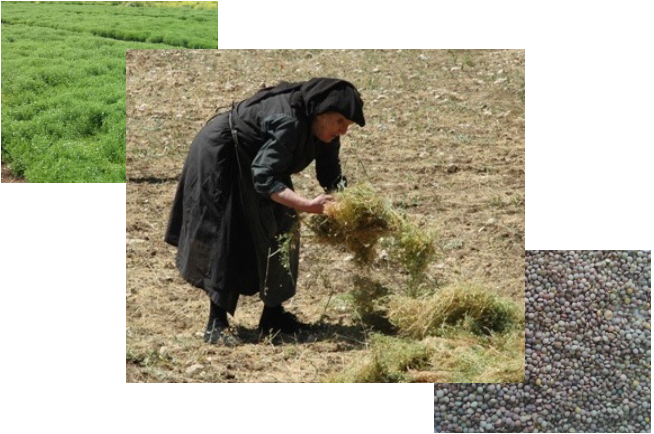 ‘Faki Eglouvis’ is traditionally cultivated on the plateau of Eglouvi at different altitudes, ranging from 700 to 960 m a.s.l. (Region of Ionian Islands, Regional Unit of Lefkada Island). The landrace is cultivated in small fields (0.1-0.4 he) with different soil texture, slope, orientation for a total of 50-60 hectares. The protected ecosystem, the soil conditions, the lack of access by road but only by footpaths until 1974 and the slow mechanization, enhance the conservation of many landraces, such as the aforementioned lentils ‘Faki Eglouvis’.


In Englouvi today live about forty families who cultivate ‘Faki’. All of them have experience of the cultivation and they can recognize the best field for the lentils. Few young people are involved in cultivation because the work is hard and the yield of the crop depends entirely on the weather. For the above reasons there is a great fear that ‘Faki Eglouvis’ on the island of Lefkada will extinct some day. Although, ‘Faki’ offers a good income to the local people, since it consists the main cultivation in Eglouvi, it was gradually abandoned as unprofitable. The inhabitants of the area struggle to keep the tradition of the lentils. Otherwise the labour of a lifetime will be lost, as well as the history of the area that is interwoven with the lentils (Vlahou 2010).

During the last years the farmers of Eglouvi realized the importance of this landrace conservation and made remarkable efforts to maintain its genetic originality and purity, not only for the benefit of the agro-diversity but also for the satisfaction of the market needs and the obtainment of a higher profit that the particular landrace can offer).


Lentil is a predominantly self-pollinating plant. The inhabitants keep the seeds from generation to generation. The farmers from Eglouvi village try to preserve the ‘original’ seeds' morphological variance when they keep seed for the next cultivation. On the contrary, whenever farmers are keeping seeds from their ‘best’ plants, they narrow the genetic base of the landrace, especially in self-pollinated species such as lentil. ‘Faki Eglouvis’ is an example of a traditional variety that is preserved by cultivation, thus there is no danger of loss of genetic diversity because of propagation from limited seeds. Nevertheless, this type of preservation incurs the danger of willingly of unwillingly mixing-up with seeds from other varieties. Such contamination when occurs in the material used for sowing the next season’s cultivar will lead to the degeneration of the variety and loss of its characteristics (Tsanakas et al. 2018).

It has a rich, local and national market due to its unique taste, texture, nutritional value and boiling quality. Although production is low, the demand is high. The distribution of Englouvi's lentils takes place after its harvest each July to August. Usually all the production is sold immediately as it has been already sold out due to huge demand before finishing the harvest. The lentils are sold only in bulk with the kilogram and in a high price. The consumers can buy ‘Faki Eglouvis’ directly from the producers at the village of Eglouvi or they can order on-line from the farmer's websites or by sending an e-mail.

Every year on the 6th of August, the lentils festival takes place. The inhabitants and the farmers celebrate their local production, and ‘Faki Eglouvis’ is cooked and served to the visitors of the plateau.

Isolation of the island and the special plateau microclimate may have contributed to the development of a distinct genetic background of the landrace that merits further study. ‘Faki Eglouvis’ is a landrace cultivated for a long time in an isolated area, with no purposeful admixture of the planting material with other varieties, which enjoys high market value and appreciation by consumers, but is frequently adulterated and downgraded in the market. The unique characteristics such as the great taste and high nutritional value of ‘Faki Eglouvis’ increased the consumers’ interest that in combination with the low crop yield formed a high market price. (Tsanakas et al. 2018).

Subsidies were given from the Ministry of Rural Development and Food to the farmers for continuing the cultivation and maintainance of ‘Faki Eglouvis’ under Measure 3.8 of Axis 3 ‘Agro-environment measures’ for the conservation of extensive crops, threatened by genetic erosion.

Currently, no scientific support is given to landrace maintainers. Several initiatives and projects were and still are carried out in an attempt to evaluate it. Among them morpho-phenological characterisation, evaluation and breeding activities of lentils landraces and cultivars for agronomic and quantity traits is implemented from the Hellenic Agricultural Organization-DEMETER, the Aristotle University of Thessloniki and the Democritus University of Thrace in the framework of a Research and Innovation Action.

Accessions of ‘Faki Eglouvis’ are kept, under long terms storage conditions in the genebank of the Institute of Plant Breeding and Genetic Resources of the Hellenic Agricultural Organization-DEMETER.

The high quality of the product, the increased perception of the landrace value and the high price of the product give hope of on-farm conservation in the next future.

Most of updates have been communicated by Vasilios Sgouropoulos (farmer).