Crop variety from some villages in the municipality of Morcín (Asturias): San Sebastián, La Foz, Lugar de Arriba, Lugar de Abajo, Santa Eulalia, La Vara and El Palacio. This council is in the Caudal region, located in the mining basins of the central Asturian mountains.

Until the introduction of the potato, the turnip constituted a very important part of human nutrition in the Asturian culture. However, it has not been totally displaced and its cultivation is still maintained in some traditional gardens.

This landrace is remembered, at least, for three generations.

The plant has a medium size and light green leaves. The root is medium-sized, globose, slightly elongated, white flesh and blackish on the outside, with a pattern of small folds marked at the base of the neck.

It is a very rustic landrace, which requires little care and resists frost. According to the farmers of the area, this crop needs water and cold to propitiate a good harvest. It is a variety of table turnip, which is not preserved as much as other varieties. However, it is also used for feeding animals during the winter months, both leaf and root.

The sowing usually takes place in the last days of August. The turnips are consumed always cooked, two or three days after being harvested. 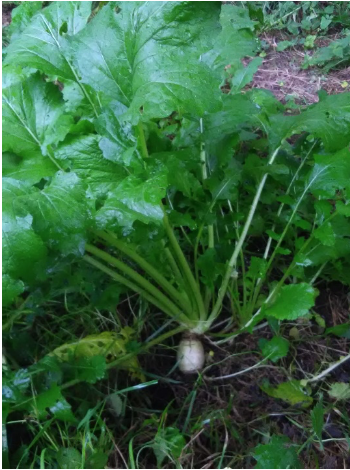 
Despite the fact that it has been in regression for the last decades, new market circuits are emerging during the last years. Farmers are receiving support from the local group ‘Cofradía de Amigos de los Nabos’ and new organic farmers are betting for its cultivation.


In order to save the seed and preserve the landrace, the most appetizing, large and healthy turnips on land at the time of harvest, are chosen. Those that match the characteristics of the landrace are selected, discarding those with white skin. The selected turnips are transplanted together to another area of ​​the garden that is free of crops and there they are left until they bloom and fruit. When the seeds are ready, carefully the stem needs to be cut by the base and let it dry. Afterwards, the fruits are broken by rubbing them between the hands and, if desired, they can be sifted and winnowed to obtain the clean seed of other remains.

Despite the pride and popular support that this vegetable has in the area, fewer and fewer people keep it in their family gardens and it is in regression. Currently there are few Morcín farmers who maintain this landrace. However, its cultivation is being introduced in other circuits. Small professional organic farmers from outside the council and new inhabitants of the Asturian rural world are betting on keep this variety in their gardens, which is having a great acceptance by consumers who buy it from new farmers.

This turnip has a tender texture flesh and thin skin. Its flavor is very pleasant and slightly sweet. Its aroma is also very soft and light. This landrace is very popular and valued in the area, since it is the main ingredient of the stewpot of turnips, emblematic dish of Morcín, forming part of its cultural heritage.

In 2002 an organization was created, called ‘Amigos de los Nabos’ (Friends of turnips), to revalue this landrace and improving the visibility of the importance of this crop in the Asturian culture. Some external support has been received for this intention.

The local seed savers group stores in its seed bank seeds from this landrace. Its ID bank register is: ID-100