The islands with the greatest historical tradition of cultivating this traditional landrace are Tenerife, La Palma, La Gomera and El Hierro. Although it can currently be found in most of the Canary Islands.

There are several historical documents in which the ‘bubango’ appears since the 18th century, so it has been playing a very important role in the local gastronomic culture for a long time ago.

It is an herbaceous plant with indeterminate growth habit, creeping or climbing, with long internodes and well-developed tendrils, more like a pumpkin plant than a zucchini plant. The flowers are unisexual and orange.

Due to the local weather, with mild winters, although it grows faster in summer, it can be cultivated all the year round. With a climatologically benign year, it can be producing on the ground just over twelve months.

The flesh of the fruit is firm, smooth texture, without being fibrous and has a flavour of medium intensity. The fruits are used in human food, being a very common ingredient in the preparation of stews. It has also been used for medicinal purposes. In the south of Tenerife, the infusion of the seeds was used to relieve irritations of the urinary tract and as a diuretic. Its seeds, peeled and dried, have been ingested to eliminate intestinal parasites.

The ‘bubango’ has a great morphological variability. The people who cultivate it distinguish several types with differences in size, shape and colour, which are handled and selected as the same variety.

The fruit is characterized by its smooth skin, with well-marked superficial ribs; seeds of light beige colour and flesh of the white fruit, which in its maturity turns yellow-orange. The shape can vary a lot, from large to round.

The main time for sowing is March, although it can be done all year. 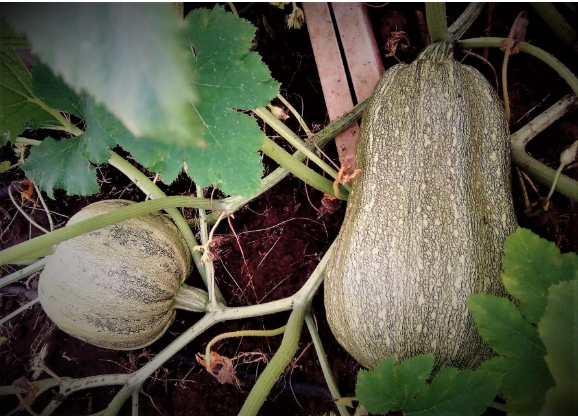 In Tenerife you can find it from low levels, near the sea, up to medium high, obtaining the best productions around 300 m. However, in the case of the municipality of Garafía (La Palma), it is sown in the forest area, at higher elevations.

In general, it is a rainfed crop that located in the areas of plots that would otherwise be unused, so it is nourished by what is applied to the central crop of the land.


The landraces are sown, cultivated and harvested together, and usually the seed of each morphotype is not separated, but it is kept together for planting next year.

The process of obtaining the seed is something that farmers have always done, either for self-supply or for exchange between different producing areas. Due to the intrinsic peculiarities of this variety, it is one of the parts of the process that is best cared for. The people who cultivate it are responsible for the selection of the fruits from which they will extract the seed of the next harvest, eliminating those that do not comply with the desired characteristics and discarding those that present deformations that indicate virosis.

Once the peduncle is dry, the ‘bubango’ is stored in a dry place for two months. Then the seeds are extracted and left several days on the sun to dry.

It is sold in the markets of all the islands, in the sales of the villages and it can even be purchased directly in the homes of some farmers. In Anaga, place of traditional cultivation, in the XVII and XVIII centuries it was a product foreign to the marketing channels, however, from the XIX century it started to be more distributed.

The Canarian population has the ‘bubango’ as something very much theirs, which is directly linked to their gastronomy and their culture, so they prefer to buy ‘bubango’ than zucchini, even if they have to pay more.

It is the most appreciated variety for the preparation of local stews. Due to the characteristics described above, it is said to be less watery than other varieties, which gives the stews and stews a characteristic flavour and texture. Also, in the ‘bubangos’ that are allowed to mature, the skin is lignified, and this allows a long conservation, being able to hold several months without spoiling.

This results in a cultural importance very extended, reflected in its appearance in various popular sayings.

Several samples of the resource are stored in, at least, three different seed banks (at date 10/03/2017):