The sowing usually takes place from March to April, when the risk of frost is reduced. It blooms at the end of May and the first of June. The first ripe fruits are at the end of June and in the month of July, and the production is extended until August. Each plant can produce four to eight watermelons.

The plant is very leafy, with very broad stems. It has few tendrils and the leaves in intense green, divided into five segments. The flowers are soft yellow, almost white, with stamens of an intense yellow.

Two variants of the landrace are known, showing differences on the color of the striped skin (yellow or black). 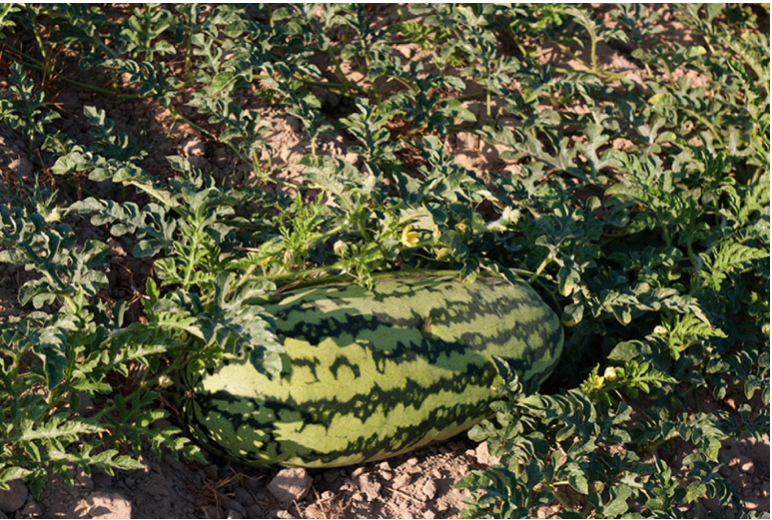 It is a rainfed crop, which grows well on loose and sandy soils.


Only a few farmers are still cultivating this landrace and the number keeps decreasing.


To obtain the seeds, the fruits that are considered best because of their size and flavour are selected. The seeds are separate as the watermelon is consumed. The seeds are not washed, they are left to dry with the pulp remains, in a dry and sunny place.

Once dried, the seeds are stored in a dry and protected place.

It is being less cultivated in the zone and those that do produced it, they do it for self-consumption.

This abandonment is due, on the one hand, to the progressive abandonment of vegetable gardens and agriculture for self-consumption and, on the other hand, due to the difficulties it presents for its commercialization. These are due to the fragility of the skin that does not make it suitable for the current forms of transport and the large size of the fruit that is not accepted by many consumers.

The local perception highlights its ability to reproduce the plant up to three consecutive years in the same place without the quality of the fruit being affected, as opposed to other varieties of the same species.

It has usually a juicy flesh with a soft texture, with a sweet flavour, and a low number of seeds that facilitates its consumption.

It is highly valued for its flavour, colour and texture, considering it to be sweeter, redder and with a smoother or non-gritty texture than other commercial varieties present in the area.