It is called ‘boniato saucero’ around the whole island of La Palma, receiving some name variations among the villages. Some names suggest its origin from Lanzarote. Apparently, it arrived at municipality of San Andrés and Sauces and from there it was extended to the rest of the island of La Palma.

This landrace has been used for preparing the traditionally meal of sweet potato buns. The cooked root is consumed, which is prepared simply cooked, fried, roasted or as an ingredient of stews. The sweet potato branch has been used to feed cows, goats, rabbits, pigs, sheep and chickens.

The planting season is usually between March and June.

The ‘boniato saucero’ present an oblong shape, with a certain tendency to show longitudinal indentations. It has pale cream-colored skin, usually with pink shades. The flesh is yellow, with scattered spots of orange color. The plant is semi-erect and dispersed, with no capacity to curl. It has green stems, with the armpits and the base of the secondary guides pigmented. Short or intermediate internodes, of diameter between thin and medium. Pubescence of the apex sparse or absentee. The flower is violet with the characteristic flared shape of the family, not differing from other varieties.

It works well in soils where it is usually cultivated the sweet potato, as in more clay soils that do not tolerate other varieties because they tend to be flooded and be very tight. These soils correspond to vertisols and are usually associated with troughs.

The harvest season varies between September and March, depending on from when they are planted. It is stored better than other varieties of sweet potato. 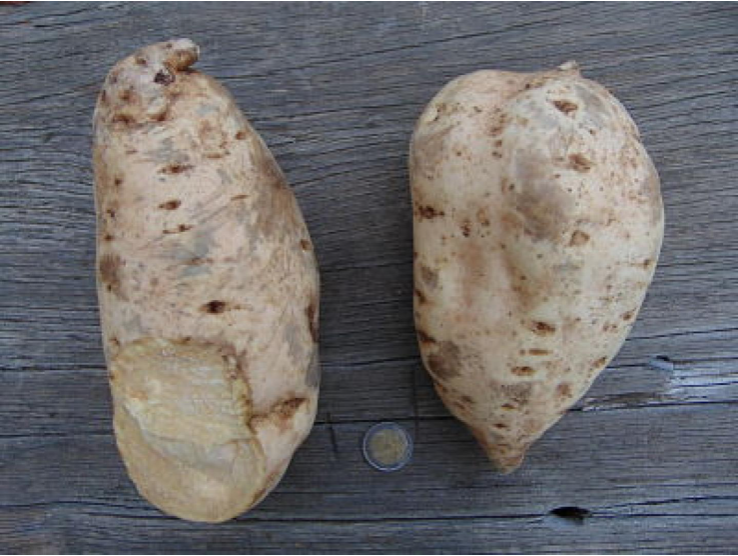 It is the oldest landrace of sweet potato most widespread in La Palma. It prefers loose, sandy soils in low elevation areas, although can reach 700m above the sea level. Being a tropical species that requires heat, it develops more quickly in coastal areas.


It is propagated by cuttings, like the rest of varieties of Sweet potato in La Palma, a mother plant used to be kept in the edge of the garden. To maintain it, the branches were cut leaving only a span, it was watered and fertilized. This way, it turns to develop more the aerial part, which allowed to have plant material for the next year.

This landrace is still cultivated, destined mainly for self-consumption or for local market. However, in today's cooking, new textures and flavours are sought and several chefs have shown interested in the sweet potato in La Palma, which can encourage the revaluation of this traditional variety.

It is one of the most valued sweet potatoes on the island for its flavour and ability to be stored for long periods. Its firm flesh can support the heat of cooking without getting rid too much, being one of the preferred varieties to boil, roast, fry or stew.

The resource is stored in CCBAT (Center of Agriculture Biodiversity Conservation of Tenerife).