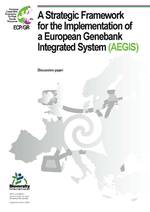 How can existing genebanks in Europe operate more rationally if the available financial and human resources remain at their current capacity? One of the ways to improve efficiency and effectiveness and to ensure rational ex situ conservation and use of plant genetic resources in Europe is through the sharing of tasks, based on an active collaboration among genebanks in the long term. A feasibility study to address this challenge was conducted in 2004-2006 within the framework of the European Cooperative Programme for Plant Genetic Resources (ECPGR). The objective of this study was to come up with a set of recommendations on how to develop a European genebank integrated system based on analysis of organizational, technical, legal and financial aspects. The analysis was made within four pilot crop working groups (Allium, Avena, Brassica and Prunus), each with a wide range of partners participating from different countries. The ECPGR Steering Committee commissioned the feasibility study with the aim of reviewing its findings and recommendations and of considering options for the implementation of a future European genebank integrated system. One of the main outputs of the study is this publication, entitled "A Strategic Framework for the Implementation of a European Genebank Integrated System". The aim of this paper is to put the vision of future task sharing among genebanks and other germplasm collection holders in Europe into the context of its possible implementation process. The paper aims at raising awareness and encouraging further debate about the technical and policy issues associated with developing such an ambitious system, at all stakeholder levels. This publication, therefore, should be considered as a discussion paper that provides direction and guidance to the ECPGR member countries and which reflects the status of an important process at this particular point in time. Although not a consensus document, it is a summary of the general views of the ECPGR Steering Committee on sharing responsibilities and provides the basis for the development of the so-called Collective Memorandum of Understanding. This paper is part of an "evolution" leading to development of the final product, a European Genebank Integrated System (AEGIS). AEGIS was conceived at a time when the International Treaty on Plant Genetic Resources for Food and Agriculture (ITPGRFA) had just been ratified by most countries of the European Region and the Governing Body of the International Treaty had held its first meeting and agreed on a standard Material Transfer Agreement, i.e. in June 2006 in Madrid, Spain. The concept of AEGIS is intended to be fully supportive of the Treaty and to contribute to its rapid implementation. The publication was prepared by the Local AEGIS Task Force at Bioversity International, consisting of Ehsan Dulloo, Jan Engels, Birgitte Lund, Lorenzo Maggioni, Gerald Moore, and Jozef Turok, through a consultative process under the guidance of the AEGIS Advisory Committee. Members of this Committee contributed with many useful comments and inputs, in addition to the AEGIS project partners involved in the pilot crop working groups and many other colleagues. Inputs received from the ECPGR Steering Committee, including the results of a roundtable discussion on AEGIS held during the Tenth Steering Committee Meeting in Riga, Latvia, were also taken into account when preparing the final version of this "Strategic Framework". It is hoped that this paper will contribute towards stimulating further discussions at the national and (sub-) regional levels as well as promoting progress of the process which will potentially result in an integrated genebank system, which will enable managing the very precious plant genetic resources existing in all European countries in the most rational way, leading to their safe conservation, availability and easy accessibility for users.