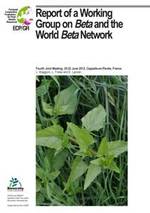 The fourth joint meeting of the ECPGR Working Group on Beta and the World Beta Network (WBN) was held 20-22 June 2012 at Cappelle-en-Pévèle, France, involving 34 participants. The meeting was hosted by the company Florimond Desprez. The meeting started with presentations delivered by WBN members, covering a wide range of topics (geographic distribution; geographic structure of genetic diversity; utilization, conservation and documentation). Projects on genetic diversity and gene flow in B. nana and Patellifolia species were discussed. Major decisions included: to support the Greek Gene Bank’s proposal for the establishment of a genetic reserve for B. nana on Mount Olympus; to revise the proposed list of 26 genetic reserve sites for Beta and Patellifolia identified by the AEGRO project and to extend it to non-EU countries (Armenia, Azerbaijan, Georgia, Iran, Russian Federation and Turkey); to prepare a project proposal to guarantee the future sustainability and further development of the International Database for Beta. The last day was dedicated to the ECPGR Working Group on Beta. This was the first opportunity of the WG to discuss the initiative for “A European Integrated System” (AEGIS). The WG agreed to develop a list of candidate accessions using the Beta Core Collection, AKER collection and accessions of threatened species. To allow sorting out accessions on the basis of their taxonomy, it was agreed that the VIR and GRIN taxonomies should be compared and a list of matching taxonomies compiled. Regarding genebank standards, the WG agreed to check the validity of the existing protocols for regeneration and to seek collaboration of USDA-ARS for the development of guidelines for the multiplication of B. nana.