Report of a Working Group on Brassica 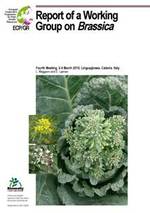 The Fourth Meeting of the ECPGR Working Group on Brassica was held on 2-4 March 2010 in Linguaglossa, on the slopes of Mount Etna, Sicily, locally organized by the University of Catania. The meeting was attended by delegates from 16 countries. The participants discussed the Brassica Working Group projects: one focuses on wild brassicas, aiming at establishing a core collection of well characterized and diverse wild accessions, the other deals with the characterization of B. rapa accessions selected from the European Brassica Database (Bras-EDB). The Bras-EDB Manager reported on the updates and improvements made in the database. The status of wild brassica conservation at the Plant Germplasm Bank of the Polytechnic University of Madrid was reported. The Italian member reported on the activities carried out by the department of Horticulture and Food Technology of Catania University (DOFATA) within the framework of the FP7 project AEGRO, for which DOFATA is lead partner in the work package on Brassica case studies. Characterization was carried out using biomorphological descriptors and the frequency of different alleles was measured for the BoAP1 SSR marker. The ECPGR Secretariat gave an update on the initiative for “A European Genebank Integrated System” (AEGIS). The proposed steps for the creation of an AEGIS Quality System were agreed by the Group. The Chair also reported on AEGIS-related activities of the Brassica Working Group during 2004-2006, which focused on the compilation of draft guidelines on the minimum standards to be met by the European Collections to ensure long-term conservation and easy access. Other topics discussed included the descriptors to use for characterization and the inventory of most important traits for evaluation.