Report of a Working Group on Cucurbits 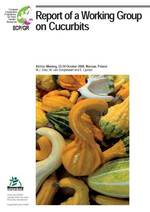 The ECPGR Working Group (WG) on Cucurbits met at the Warsaw University of Life Sciences, Poland, on 23-24 October 2008 in an ad hoc meeting bringing together representatives from 13 European countries holding major Cucurbit collections in Europe. The aim of the meeting was to start the implementation of “A European Genebank Integrated System” (AEGIS) by the WG. The participants reported on the status of their national collections. The status of the European Central Cucurbits Database (ECCUDB) was presented by the WG Chair, highlighting the improvements made since the last meeting held in Czech Republic in June 2007. The background, goal and scope of AEGIS, and the role of the WGs in its implementation were presented. Particular focus was set on the selection of the Most Appropriate Accessions (MAAs). Two case studies were presented and discussed, and it was proposed that further case studies be prepared, based on the specific characteristics of the European collections, in order to cover all the possible features of the Cucurbits WG collections. Members were encouraged to compile a survey for conservation, management and regeneration procedures of genetic resources, adapted from that developed by the Brassica Working Group, in order to initiate the establishment of standards to be used for the maintenance and regeneration of the MAAs. Other topics discussed included the level of safety-duplication, status of long-term conservation facilities and status of regeneration requirements. Plans were made to improve the level of safety storage for Cucurbits collections. Further plans were also made for the development of minimum descriptor lists for Cucurbita, Lagenaria and Momordica spp.