Report of a Working Group on Leafy Vegetables 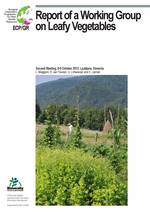 The second meeting of the ECPGR Leafy Vegetables Working Group (WG) was held 8-9 October 2013 at Ljubljana, Slovenia. The meeting, organized in collaboration with the Agricultural Institute of Slovenia, brought together 16 participants from 13 countries. Overviews of national collections of leafy vegetables were presented and updates were provided on ECPGR, AEGIS and EURISCO. The achievements of the WG since last meeting were reviewed and further activities were discussed. Regarding the development of the AEGIS European Collection, the Group agreed on the latest procedure proposed by the ECPGR Secretariat to emphasize the primary role of the individual countries in the selection of AEGIS accessions. Regarding the crop-specific standards to be adopted by the WG as part of the AEGIS Quality System (AQUAS), the FAO Genebank standards endorsed in April 2013 were generally accepted with some additions/amendments for lettuce and spinach, based on the protocols currently used by members. A similar approach will be followed for chicory and minor leafy vegetables. The Group discussed the relationship of the Central Crop Databases and EURISCO. The International Leafy Vegetable Databases (Chicory, Lettuce, Spinach and Minor Leafy Vegetables), were largely developed thanks to an EC-funded project between 2007 and 2010. The Group recommended not investing in further development of the databases but supporting the expected improvements in EURISCO, such as the inclusion of characterization and evaluation data and other functionalities.