Report of a Working Group on Malus/Pyrus 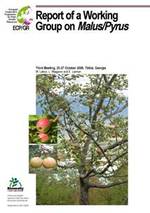 The Third Meeting of the ECPGR Working Group on Malus/Pyrus was held in Tbilisi, Georgia, 25-27 October 2006 and was attended by representatives from 21 countries. The meeting was organized at the Institute of Horticulture, Viticulture and Oenology, in collaboration with the Georgian Academy of Sciences, with a contribution from the World Bank project of Georgian Agricultural Research. The Working Group members presented the status of their national collections and discussed the updating and improvement of the ECPGR Malus and Pyrus Databases (descriptor lists, development of standardized methods for inclusion of fruit pictures in the databases, plans for the harmonization between the Malus, Pyrus and Prunus Databases, etc.). The Group also discussed the initiative for “A European Genebank Integrated System” (AEGIS) and the approach of the Malus/Pyrus WG towards its implementation. A few experiences were presented (by Belgium, France and The Netherlands) on the use of molecular markers as a tool for the identification of apple and pear accessions in collections. The Group was informed about the submission of the BIODIFRUIT project to the second call of proposals under EC Regulation 870/2004. This project, coordinated by CRA, Belgium, focuses on cherry and pear genetic resources and involves 24 partners from 16 countries. Studies on wild relatives were presented (Malus sylvestris diversity in Belgium; Conservation of Malus sieversii in Kazakhstan). Other topics include a report on the “Methodology for the evaluation of the resistance of apple genetic resources to rosy apple aphid and woolly aphid in controlled conditions” and the “EU INTERREG trans-border project between France and Belgium on the conservation, evaluation and valorization of Malus and Pyrus genetic resources”.