Report of a Working Group on Medicinal and Aromatic Plants 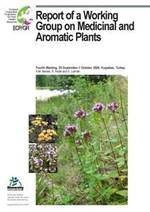 The Fourth Meeting of the ECPGR Working Group (WG) on Medicinal and Aromatic Plants (MAPs) was held on 29 September to 1 October 2009 in Kusadasi, Turkey, organized by the Aegean Agricultural Research Institute. The meeting was attended by 23 representatives from ECPGR member countries and 7 observers. Major items discussed include: crop-specific characterization and evaluation descriptors for the ten priority species selected by the WG; documentation of ex situ collections and in situ populations; implementation of “A European Genebank Integrated System” (AEGIS) (selection of accessions for the European Collection, adoption of AEGIS quality standards for conservation of accessions in ex situ genebanks). The meeting also focused on the project for “Conservation and characterization of oregano (Origanum vulgare L.) wild populations in Europe”. The revised project document was presented and endorsed. The list of project partners and detailed workplan are included in the present report. The University of Veterinary Medicine in Vienna will carry out molecular and chemical analyses. The data collected would contribute to the selection of oregano accessions to be included in a European Collection according to the AEGIS concept. The WG decided that the original “priority list” of MAP species should be expanded, to show the existence of some common regional strategies and priorities and support the choice of species by national projects. The ten target species will, however, remain as highest priority for the WG. The expanded priority list will be used to produce a document showing the level of threat and the Red List status for MAP species in Europe. Other opportunities for cooperation were identified: increase of the focus on in situ conservation; potential of in vitro or cryopreservation methods to improve the status of safety-duplication; usefulness of micropropagation methods for rare and threatened species, for conservation and reintroduction of species into former habitats, and for commercial production of plants and MAP products.