Report of a Working Group on Umbellifer Crops 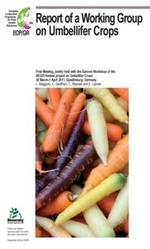 The First Meeting of the ECPGR Working Group on Umbellifer Crops took place on 30 March–1 April 2011 at the Julius Kühn-Institute in Quedlinburg, Germany, jointly with the second and final workshop of the project on “Assessment of unique material in the European collections of umbellifer crops” funded by the initiative for “A European Genebank Integrated System” (AEGIS). The priority for this meeting was to validate the analysis made on carrot accessions in the European Plant Genetic Resources Catalogue (EURISCO) and to identify a number of accessions to be proposed as European accessions for AEGIS. The methodology for selecting accessions was discussed. A tentative selection of 1415 carrot accessions was made. The list will be cross-checked, confirmed with complementary information and extended to landraces and wild relatives. The analysis will also be extended to other Apiaceae. Minimum descriptors for characterization of carrot, celeriac, celery, dill and parsley were selected and agreed, and minimum standards for regeneration and long-term conservation conditions were proposed as required by the AEGIS quality system. The implementation of a project on characterization of wild relatives was discussed. This project was approved by the Steering Committee as an ECPGR Network activity. The objective is to clarify the status of ex situ accessions and in situ populations and to make progress in the taxonomy identification. The main interest and expertise of the Working Group would be in the characterization of wild relatives of carrot and celery. The usefulness to continue the maintenance of the ECPGR Umbellifer Database rather than simply relying on EURISCO was discussed. It was concluded that the Database remained useful at present since it allows including additional passport data that cannot reach EURISCO and additional minimum characterization descriptors, as well as easy and flexible specific crop searches on the downloaded files.