Report of a Working Group on Vitis 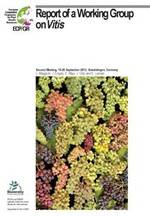 The second meeting of the ECPGR Vitis Working Group was held 18-20 September 2012 at Siebeldingen, Germany, involving 18 WG members and 3 observers. The meeting was organized in collaboration with the Julius Kühn-Institut (JKI), Institute for Grapevine Breeding Geilweilerhof, Siebeldingen. All Vitis WG members were invited to join the COST Action FA1003 on “East-West collaboration for grapevine diversity exploration and mobilization of adaptive traits for breeding” and establish agreements with COST partners for fingerprinting of accessions identified as candidates for the European collection. The status and progress of the European Vitis Database, hosted and maintained by JKI were presented. The meeting acknowledged the European Catalogue of Nationally Registered Varieties as currently the most reliable and up-to-date for the definition of synonyms of registered varieties in Europe, and recommended using at least the 9 SSRs agreed by the WG for the determination of the identity of an accession and the 48 descriptors of the EC GrapeGen06 project for trueness-to-type testing. The Group agreed to contribute to the development of a simplified protocol for the movement of propagation material across countries within and outside the EU. The meeting discussed the initiative for “A European Genebank Integrated System” (AEGIS) and the establishment of the European Collection. A procedure for the selection of AEGIS accessions was agreed, focusing on minor and neglected cultivars of European countries. A preliminary list of autochtonous varieties to be included in the European Collection was drawn. The WG agreed with the AEGIS draft policy for safety-duplication and endorsed the draft FAO generic standards for non-orthodox seeds and clonally propagated plants, with the addition of a few Vitis-specific standards. A mechanism was set up for the mobilization of small funds to respond to critical situations threatening the survival of important germplasm. On the last day an excursion was organized to Ketsch Island, a nature protection area where a population of Vitis sylvestris occurs naturally and is being monitored.