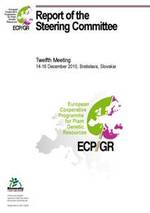 The twelfth meeting of the ECPGR Steering Committee (SC) was held in Bratislava, Slovakia, 14-16 December 2010 to discuss the report of the Independent External Review, which had been completed in July 2010. The main decisions of the meeting include: a consensus agreement on the wording of ECPGR’s new goal and outcomes; the establishment of an Executive Committee, immediately elected; plans for the preparation by the Executive Committee of an “Options paper” on future direction of ECPGR, to be discussed at the next SC meeting; plans to deal with the European Commission and produce a brief strategy paper on the relationship of ECPGR with the European Union/Commission and Parliament; confirmation of the role of the Programme as the owner of EURISCO and supervisor of its development. The SC gave clear confirmation that they regarded AEGIS as a pillar for the implementation of ECPGR objectives and requested the Working Groups to be more achievement-oriented, such as in defining the European Collection and the crop quality standards for conservation.