Report of a Vegetables Network 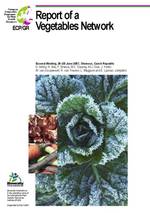 The Second Meeting of the Vegetables Network (VEGNET) of the European Cooperative Programme for Plant Genetic Resources (ECPGR) was held on 26-28 June 2007 in Olomouc, Czech Republic. The meeting was organized jointly with the Third Meeting of the ECPGR Working Group on Medicinal and Aromatic Plants (MAP WG), which had been formally included in the VEGNET from January 2004 to September 2006. The local organization of the meetings was arranged by the Crop Research Institute, Prague-Ruzyne, Division of Plant Genetics, Breeding and Product Quality, and its local Department of Vegetables and Special Crops in Olomouc. The first introductory session was attended jointly by the VEGNET and MAP Working Groups. The list of participants in the VEGNET meeting is given in Appendix IX. All information related to the MAP WG Third Meeting will be published in a separate report.