The ‘Almagro’ eggplant is grown during the summer season in the open field and is used for making pickles (Hurtado et al., 2014). The plant is small and produces clusters of small fruits in inflorescences, which typically have several flowers (Muñoz-Falcón et al., 2009b). A distinctive feature of the fruits is that they are harvested when small (4 to 9 cm in length) and are covered by an acrescent, and on occasion prickly, calyx. The berry is obovoid and has a pale green colour with anthoycianin pigmentation in the parts exposed to the sun. The ‘Almagro’ eggplant can be distinguished from other similar varieties from the region of Andalusia by morphological traits and through molecular markers (Muñoz-Falcón et al., 2009b). A selection called H15 with less prickles and higher yield has been obtained after a selection process within the landrace (Prohens et al., 2009). After harvesting, the fruits are graded, blanched and fermented (Seseña and Palop, 2007). 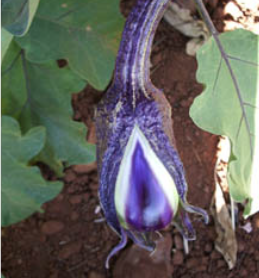 Almagro’ eggplant is cultivated in seven municipalities of the Campo de Calatrava county, in the province of Ciudad Real, in the center of Spain. This area is characterized by ancient volcanic hills and cereals and olive trees are among the predominant crops. However, due to the availability of ground water season vegetables are grown. To avoid soil diseases, and due to the availability of land, farmers frequently avoid crop repetition and Almagro eggplant in the same soil in some cases for up to 15 years. Field plots where the Almagro eggplant is cultivated are variable in size, but usually are they do not have more than 1 ha.


The landrace has maintained its production in the last decades, as the pickled ‘Almagro’ eggplants are locally appreciated in the Campo de Calatrava county and also in other parts of the center of Spain. However, during the last years there has been a renewed interest in the landrace and the cultivation has increased, with an acreage of around 60 ha and a production of around 2 million kg. Although many farmers are old, some young farmers are growing the ‘Almagro’ eggplant. Typically, farmers make their own selections and multiply their own seeds, which has contributed to maintaining the genetic diversity of the landrace (Muñoz-Falcón et al., 2009b). However, exchanges of seeds among farmers are common and some local companies are marketing selections.

An association exists for the promotion and enhancement of the Almagro, in which the members are a number of farmers and industrialist producing the pickled eggplants. This association is in charge of the enhancement of the variety and controlling the production of ‘Almagro’ eggplants regulated since 1994 under the Protected Geographical Indication (PGI) ‘Almagro eggplant’ (Hurtado et al., 2014).


As other eggplant varieties, ‘Almagro’ eggplant is mostly autogamous; however, under the open field conditions in which this variety is typically grown, cross-pollinations may occur due to the presence of pollinator insects such as bees and bumblebees (Pessarakli and Dris, 2004). In fact, farmers have reported genetic contamination by crossing with other similar varieties grown in nearby fields and also with fresh market varieties, which result in off-type plants in the field (Hurtado et al., 2014). Particularly, the cultivation close to the ‘Almagr’ eggplant fields of pickling varieties from the neighbouring region of Andalusia, which have less prickles, but give a lower quality to the pickled produce (Muñoz-Falcón et al., 2009) has been reported as a problem for maintaining the genetic integrity of the ‘Almagro’ eggplant (Hurtado et al., 2014).


The Association for the Promotion of the Protected Geographical Indication ‘Almagro eggplant’ is in charge of controlling that the materials used for producing the pickled ‘Almagro’ eggplant correspond to the local variety. The use of selected morphological descriptors and molecular markers (Muñoz-Falcón et al., 2009) can help in maintaining the genetic integrity of the landrace. Also, in order to guarantee the conservation of the local variety, the ‘Almagro’ eggplant has been registered as a conservation variety and is maintained by a local research center (El Chaparrillo; http://pagina.jccm.es/agricul/chaparrillo/chaparrillo.htm).

The ‘Almagro’ eggplant is marketed canned in different sizes and has an important local market. However, it is also frequent to find it in many supermarkets in several parts of the country, including the center of Spain and some parts of the rest of Spain where a large immigration from the Center of Spain took place in the 1960s to 1980s, such as Barcelona or Valencia. The pickled ‘Almagro’ eggplant is mostly used as starter or for eating informally as tapas. More recently, some farmers are also exploring the possibility of marketing the fruits for the fresh fruit market, as they have a distinctive fruit morphology.

Obtaining the PGI status in 1994 (http://www.cerespain.com/berenjena-de-almagro-reglamento.html) certainly added a considerable value to the ‘Almagro’ landrace, as costumers have a guarantee of quality and a protection against fakes (Hurtado et al., 2014). Up to now, the ‘Almagro’ eggplant is the only eggplant in Europe having a PGI or PDO status. The fact that ‘Almagro’ is, among the eggplant varieties, one with the highest content in phenolics has also contribute to adding value to this variety, as the high content in these antioxidants is used in advertisements.

The Association for the Promotion of the Protected Geographical Indication ‘Almagro eggplant’ is supported by the Regional Government, which provides some subsidies for the enhancement of the variety and for experimentation. Scientific support to the Association and to the farmers and industrialists is given by some local researchers from El Chaparrillo research center as well as from the University of Castilla-La Mancha and from other research centers of Spain, mostly in joint research projects funded by public agencies.

The conservation of the landrace on farm is guaranteed as long as the produce obtained (pickled eggplants) are continuing having demand on the market. No evidence of decrease of demand is observed in the last years; in fact, an increase in demand took place during the 2000s (Prohens et al., 2009). The surveillance of the characteristics of the materials conserved on farm may help in avoiding the genetic contamination by mixing up or crossing with other eggplant varieties.

The Association for the Promotion of the Protected Geographical Indication ‘Almagro eggplant’, the ‘El Chaparrillo’ research center (http://pagina.jccm.es/agricul/chaparrillo/chaparrillo.htm), and the germplasm bank of the Universitat Politècnica de València (https://www.comav.upv.es/) conserve seeds of this landrace and can be approached to obtain samples.

To the members of the Association for the Promotion of the Protected Geographical Indication ‘Almagro eggplant’, in particular Mr. Ángel Castro, whom provided lots of information on this landrace through the last 15 years.