Report of a Working Group on Avena 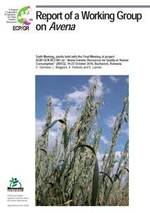 The sixth meeting of the ECPGR Working Group on Avena was held in Bucharest, Romania, on 21-22 October 2010, back-to-back with the final meeting of the AGRI GENRES project AVEQ on “Avena Genetic Resources for Quality in Human Consumption” (19-21 October). The first part of the publication reports the results of field experiments and analyses carried out in the framework of the AVEQ project, covering yield and technical quality, Fusarium-related issues, nutritional quality of oats and cold tolerance in oat genetic resources. The second part, dedicated to the activities of the ECPGR Working Group on Avena, focuses on wild species (collecting in Cyprus, Sicily and Spain in the framework of the AEGRO project; domestication, multiplication and regeneration issues) and on sharing of responsibilities, particularly for the implementation of “A European Genebank Integrated System” (AEGIS). Significant progress had been made in the ECPGR Avena Database, which can now integrate in situ data from the AEGRO project as well as evaluation data from the AVEQ project. The database can be used to define the Most Appropriate Accessions for the AEGIS European Collection. The material selected for the AVEQ project could immediately be suggested to become European accessions in the AEGIS system. Areas of interest for future project proposals were also discussed (wild species, base-broadening of A. sativa, domestication of the wild species, genotyping, etc.).