Report of a Working Group on Prunus 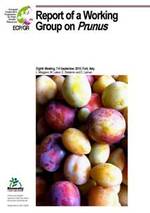 The eighth meeting of the Prunus Working Group (WG) was held in Forlí, Italy, on 7 9 September 2010, organized by the Fruit Crop Research Unit of Forlí. The meeting was attended by participants from 22 countries. The status of the Prunus collections in Europe was reviewed, based on the answers to a survey received from 52 Europeans institutions representing 15 countries. These hold a total number of accessions of more than 15 700, including more than 10 700 of national origin. The main problems identified were the health status of the trees and lack of funds; some very old field collections need urgent regeneration. The need was identified to establish national networks for fruit tree conservation. Successful examples of such networks will be made available on the Web, to serve as a model for other countries. The progress made in the European Prunus Database (EPDB) managed by INRA-Bordeaux, France, was presented. The EPDB can host passport data, characterization and evaluation (C&E) data, photographs, data on molecular markers and genotypes. Data owners will be able to directly upload their data. The EPDB model tool will be tested and possibly adopted for the ECPGR Pyrus Database. A portal providing access to six distinct databases (Almond, Apricot, Cherry, Peach, Plum and Inter-specific hybrids) will soon be available. The WG agreed on minimum passport and C&E descriptors and on the need to define crop-specific lists of SSR markers to be used when fingerprinting cherry, apple and pear accessions of European collections. Guidelines for taking photographs are also being finalized. The next steps for implementation of “A European Genebank Integration System (AEGIS)” by the WG were discussed. The selection criteria to be used for the choice of Most Appropriate Accessions (MAAs) were prioritized. The WG agreed to work towards the definition of a list of cherry MAA candidates for the AEGIS European Collection and the finalization of the list of Prunus-specific standards for conservation. A methodology for safety-duplication will also be prepared.