Report of a Working Group on Solanaceae 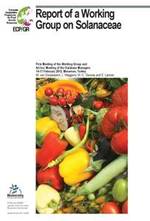 The first regular meeting of the ECPGR Solanaceae Working Group was held on 15-17 February 2012, following an ad hoc meeting of the Solanaceae Database Managers on 14 February 2012. The meetings were organized in collaboration with the Aegean Agricultural Research Institute (AARI), Menemen, Izmir, Turkey. The major focus was on the implementation of “A European Genebank Integrated System” (AEGIS). Data quality is critical for the selection of accessions for the AEGIS European Collection. The discrepancy observed between data from the European Genetic Resources Search Catalogue (EURISCO) and the Central Crop Databases (CCDBs) should be solved. It was recommended that EURISCO be improved to serve the purpose of identifying AEGIS accessions, and that the responsibility of monitoring crop-specific data in EURISCO be assigned to the CCDB Managers. This responsibility will be taken up by the Managers of the Solanaceae CCDDBs (Tomato, Eggplant, Pepper, Pepino, Groundcherry and Tree tomato). Working sessions were dedicated to the compilation of lists of candidate AEGIS accessions for tomato, pepper and eggplant. Procedures for endorsement of these lists and development of additional lists for formal inclusion into AEGIS were defined. The AEGIS Quality System (AQUAS) was presented and the meeting adopted the draft FAO Genebank Standards for the conservation of orthodox seeds. Other topics included the planning for safety-duplication of Solanaceae accessions in Europe, the finalization of minimum descriptor lists for Pepino, Groundcherry and Tree tomato, and the organization of an ad hoc meeting to use the “PGR Duplicate Finder” software, currently under development at CGN, on the Solanaceae Databases.