Report of a Working Group on Allium 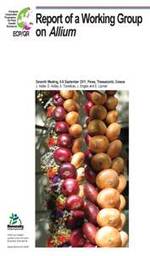 The seventh meeting of the ECPGR Working Group (WG) on Allium took place on 6-8 September 2011 in Perea, near Thessaloniki, Greece, bringing together 14 members, 7 observers and the Coordinator of the initiative for “A European Genebank Integrated System” (AEGIS). The status of the European Allium Database (EADB) was presented and the WG agreed to continue its management and development. The EADB, which will be transferred from the University of Warwick to IPK-Gatersleben from January 2012, provides the foundation for the selection of European Accessions for AEGIS. The WG agreed on methods to establish the list of candidate European Accessions for seed-propagated Allium landraces(using leek as an exemplar), seed-propagated wild Allium taxa, and cultivars. The selection processes were summarised in flow diagrams. It was agreed to start with A. ampeloprasum and then extend the list to other priority groups of seed-propagated species. Other activities on seed-propagated species will include updating the information on conservation status of Allium landraces and safety-duplication. Vegetatively propagated species had been the main focus of the WG over the past 10 years. Results of the EU-funded project on garlic and shallot, EURALLIVEG (“Vegetative Allium, Europe’s Core Collection, Safe and Sound”), were presented, as well as a report on the AEGIS-funded project on “Cryopreservation of young inflorescence bases in bolting garlic for germplasm storage”. Future developments for vegetatively propagated material include a project on molecular characterization, aiming at covering all European garlic genetic resources as completely as possible. Other topics discussed include the selection process of the European Accessions of vegetatively propagated Allium and the development of standards for vegetatively propagated crops.