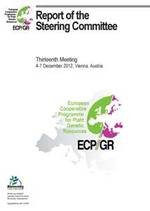 The Thirteenth Meeting of the ECPGR Steering Committee took place 4-7 December 2012 in Vienna, Austria, hosted by the Federal Ministry of Agriculture, Forestry, Environment and Water Management. This meeting had the ambitious objective of making important decisions for the transition of ECPGR from its Phase VIII (2009-2013) to a new Phase IX (2014-2018), defining a new operational structure, mode of operation, objectives, hosting arrangements and external visibility of ECPGR. The proposed changes were triggered by the External Independent Review of ECPGR undertaken in 2010 and resulted from the process that was set in motion during the Twelfth Steering Committee meeting in Bratislava (December 2010).